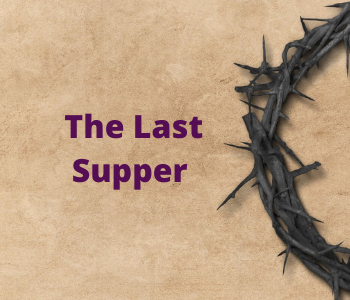 Today is Maundy Thursday. Maundy Thursday or Holy Thursday is the day during Holy Week that commemorates the Washing of the Feet and Last Supper of Jesus Christ with his disciples, as described in the gospels.

Many artists have painted the Last Supper, a glorious scene from the Bible. One such rending is the Last Supper, one of the most famous artworks in the world, painted by Leonardo da Vinci probably between 1495 and 1498. It is his visual interpretation of the passages we are going to look at today.

We are in the middle of Passover, also known to Christians today as Passion Week or Holy Week.

In honor of Passover and Maundy Thursday, let’s look at Scripture from Matthew 26:17-29.

“Now on the first day of Unleavened Bread, the disciples came to Jesus, saying, “Where will you have us prepare for you to eat the Passover?” He said, “Go into the city to a certain man and say to him, ‘The Teacher says, “My time is at hand. I will keep the Passover at your house with my disciples.”

And the disciples did as Jesus had directed them, and they prepared for the Passover. When it was evening, he reclined at the table with the twelve. And as they were eating, he said, “Truly, I say to you, one of you will betray me.”

And they were very sorrowful and began to say to him one after another, “Is it I, Lord?”

He answered, “He who has dipped his hand in the dish with me will betray me. The Son of Man goes as it is written of him, but woe to that man by whom the Son is Man is betrayed! It would have been better for that man if he had not been born.

Judas who would betray him, answered, “Is it I, Rabbi?” He said to him, “You have said so.”

Now as they were eating, Jesus took bread, and after blessing, he broke it and gave it to the disciples, and said, “Take, eat; this is my body.”

And he took the cup, and when he had given thanks, he gave it to them saying, ” Drink of it, all of you, for this is my blood of the covenant, which is poured out for many for the forgiveness of sins. I tell you I will not drink again of this fruit of the vine until that day when I drink it new with you in my Father’s kingdom.”

Jesus didn’t own a home while on earth, so the disciples’ question about where they were going to eat Passover dinner was important. They knew they needed to prepare the dinner, but where they would prepare was still unknown.

They ask Jesus, and he directs them. Scripture says they obeyed and prepared accordingly. Later that evening, they reclined around the table together.

Can you imagine sitting there with Jesus, and he says, “One of you will betray me?”

They start to question each other, and it wouldn’t surprise me if a few of them worried if it was them.

Judas Iscariot is the traitor of the group, and isn’t it interesting that he asks Jesus if it’s him? Can you see him trying to act concerned for himself? He wants to look innocent in front of the others. The others never accuse Judas of being the one, and it could be because he throws himself out there.

How unnerving it must have been for Judas when Jesus looks at him and confirms he knows it’s him. Jesus knows Judas is going to betray him. I wonder if Judas was secretly dying inside, wondering how Jesus knew it was him, especially after hearing Jesus say it would be better for that man if he were never born. Woe!

The Bread and the Cup

Jesus did four things with the bread.

What should the response be?

Receive Christ as he is offered.

What did he do with the cup?

What does the cup represent?

“It is poured out for the forgiveness of sins. That is, to purchase forgiveness of sins for us. The new covenant which is procured and ratified by the blood of Christ is a charter of pardon, an act of indemnity in order to bring about reconciliation between God and man.”

I couldn’t skate by the importance of today’s passages on the Last Supper. Christ is to us the Passover sacrifice by which atonement has been made. He is our Passover Lamb.

Tomorrow, we will look at what happened on Friday of Passover week. I hope you will join me.

Starting Over At 54 – Autism And Food