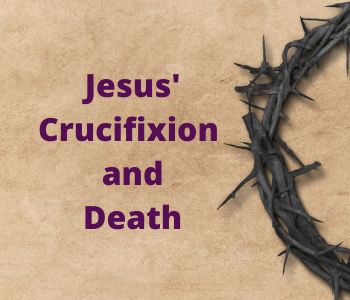 It’s Good Friday. Welcome to our look at Passover week. We have arrived on our journey through Scripture this week, where we have looked at each day, and today is no different  – Jesus’ crucifixion and death. We will attempt to bring glory to God through our look into this dramatic and life-changing sacrifice.

The Crucifixion of Jesus

17 and he went out, bearing his own cross, to the place called The Place of a Skull, which in Aramaic is called Golgotha. 18 There they crucified him, and with him two others, one on either side and Jesus between them. 19 Pilate also wrote an inscription and put it on the cross. It read, “Jesus of Nazareth, the King of the Jews.” 20 Many of the Jews read this inscription, for the place where Jesus was crucified was near the city, and it was written in Aramaic, in Latin, and in Greek. 21 So the chief priests of the Jews said to Pilate, “Do not write, ‘The King of the Jews,’ but rather, ‘This man said, I am King of the Jews.’” 22 Pilate answered, “What I have written I have written.”

28 After this, Jesus, knowing that all was now finished, said (to fulfill the Scripture), “I thirst.” 29 A jar full of sour wine stood there, so they put a sponge full of the sour wine on a hyssop branch and held it to his mouth. 30 When Jesus had received the sour wine, he said, “It is finished,” and he bowed his head and gave up his spirit.

The more I study these events, the more moved I am by what Jesus did for me on the cross that day 2000 plus years ago. It moves me more and more the older I get, knowing the heap of filthy rags I am.

Judas Iscariot led a crowd of men with swords and clubs to the Garden of Gethsemane, where he believed Jesus would be, and he was correct.

Jesus was arrested and taken into custody. His first trial was before Annas that Thursday evening. Between Thursday evening and Friday morning, Jesus had been through six trials and interrogations.

Scripture does tell us that Barnabas was held in jail. There were two thieves crucified with Jesus. I think it’s safe to assume they had been in jail, but we don’t read about Jesus spending any time in jail awaiting trial.

How quick some of the Jews and the men of esteem, those teachers of the law, scribes, and chief priests, were to crucify Jesus. If you read the account before Jesus was handed over to be crucified, we read that Pilate could not find anything against Jesus. Pilate says three times he finds no wrong in Jesus. Still, they wanted him dead.

Crucifixion was a Roman means of execution in which the prisoner was nailed or tied to a wooden stake or cross. In the case of Jesus, we read in John 20:25 that Jesus had nail-pierced hands. The Roman soldiers drove heavy nails through his wrists and heel bones. In addition to the flogging he received before going to the cross, now the means to hold him to the cross was marked on his hands and feet.

I am going to write a separate account of the physical stress crucifixion places on the body. We must understand what Jesus may have endured while hanging on the cross.

It’s interesting to note that none of the gospel writers address the physical agony of his crucifixion.

“It is finished.” The last words Jesus spoke before he took his last breath – it is finished. I wonder if cheers rang out among his enemies who had waited so long for this moment? Finally, the trouble maker who came to Jerusalem and caused such a stir was dead. The chief priests, elders, and teachers of the law didn’t have to worry about this man from Nazareth, who they claim blasphemed God.

What about his followers? Mary Magdalene? The disciples? I can’t begin to imagine what they felt as they stood there staring at their teacher on the cross. Did memories flood their minds? Did the disciples wonder how they would go on without him?

And what about his mother, Mary? The Bible doesn’t record any words from her as she stood there watching her son, Jesus, hang on the cross. How hard that must have been even though she knew who he was. She knew from before he was born who he would be.

The angel came to her and told her she would give birth to a son, and he would be the Son of the Most High, and the Lord God would give him the throne of his father, David. Furthermore, the angel told her Jesus would reign over the house of Jacob forever, and his kingdom would have no end.

Did Mary understand the purpose of the cross?

The Bible doesn’t record all the conversations between Mary and her son Jesus, so we don’t know. She would have to trust the Lord God as she did the day the angel gave her the news of her coming son.

As the crowds thinned out and people went back to their homes, Jesus hung lifeless on the cross – done; or so everyone thought.

Verse Of The Day: The Last Supper

The Lord is Always Watching