Verse Of The Day – The Sin of Partiality 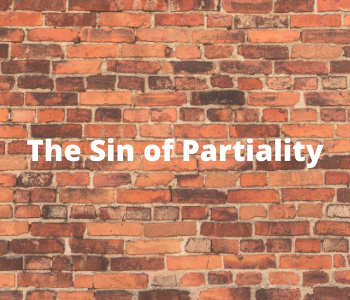 Partiality. It’s a big word. Admittedly, I am not a scholar when it comes to big words. I have to look them up for their meaning. Big words are not a staple in my vocabulary word, so if my writing seems too simple, you know why.

Years ago, I listened to a sermon and thought to myself, ‘I have an AA degree in Divinity, but this guy is talking over my head. If I can’t understand what he is saying, can the others?’ Talk to me on the lower level, explain it to me, and show me. Then I will understand.

I looked up the word partiality in my Strongs Exhaustive Concordance. If you are unfamiliar with this book, it essentially defines just about every word in the Bible, giving Hebrew or Greek meaning depending on location in the Bible.

According to Strongs in Greek, partiality means “to separate thoroughly, withdraw from or oppose, judge, discern, contend, be partial, doubt.”

With this in mind, let’s look at our verse of the day, which comes from James 2:1-4.

“My brothers, show no partiality as you hold the faith in our Lord Jesus Christ, the Lord of glory. For if a man wearing a gold ring and fine clothing comes into your assembly, and a poor man in shabby clothing also comes in, and if you pay attention to the one who wears the fine clothing and say, “You sit here in a good place,” while you say to the poor man, “You stand over there,” or, “Sit down at my feet,” have you not then made distinctions among yourselves and become judges with evil thoughts?”

I think James is talking about more than whether you prefer vanilla over cream cheese icing from what I read. There is a difference between the two.

How does God view this?

God doesn’t show partiality based on outward appearances. God’s remnant is made up of all sorts of people regardless of how they dress. Best dressed and poorly dressed, rich or poor people, all stand on the same level in the eyes of God.

We tend to judge those who look different, sound different, or live differently than we do. Based on our judgment, we act accordingly, whether it’s ignoring them or elevating them. Do you find that you elevate those who are more finely dressed or have more money than those who appear lowly and poor?

The poorest person in the world could have the richest faith, perhaps richer than our faith. To judge them based on outward appearances would be a sin.

We may be tempted to show partiality to the rich for what we can gain. This temptation, while understandable, is unacceptable.

We should not discriminate or show favoritism based on looks or status. However, we should elevate Jesus Christ above all. Jesus Christ deserves all honor and glory. He is worthy of being praised.

Only One Can Fix The Mess We’ve Made

God Can Handle It All!

Verse Of The Day – Lifestyle Choices