Forgive Others so You Can be Forgiven 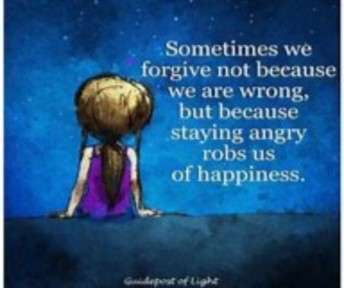 Mark 11:24-26: “Therefore I tell you, whatever you ask for in prayer, believe that you have received it, and it will be yours.  And when you stand praying, if you hold anything against anyone, forgive him, so that your Father in heaven may forgive you and your sins.”

It’s very hard to extend forgiveness to people who have hurt or betrayed us. But as scripture so plainly says, we must so that we can be forgiven.

If God can forgive our worst sins, stuff that genuinely disappoints and scares us or hurts us deeply, then we should be able to extend forgiveness to others who have done the same.

But what they did hurt me

Does that mean we are letting them off the hook? Maybe so. Aren’t we being let off the hook each time God forgives us?

When we forgive, God forgives us for our offenses to Him.

When we choose to hold onto the offense, we are choosing to carry the unforgiveness around with us everywhere we go. It takes purposeful action to carry the offense. Suitcases require we carry them or they sit in one spot. Unforgiveness requires we carry it everywhere. The other option is to let it go and leave that bag at the curb.

And then, of course, there is the other side of the coin – the person who offended you has no idea you are still boiling over the offense. This can exaggerate the situation because they have no idea they hurt you. The more clueless they appear to you, the angrier you get.

Forgive so you can be forgiven

It is something to think about the next time we refuse to extend forgiveness to another.

True Stories- There are No Other Explanations