The Unbelief Is Real – Then And Now 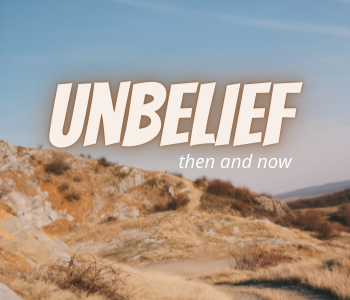 Welcome to another edition of The Teaching Lady. Today we continue examining prophetic Scripture on the Messiah. The Old Testament contains many verses about the coming Messiah. But, unfortunately, many in those days did not believe the prophetic words, whether about the Messiah or warnings from God about upcoming judgment.

Today, we are going to look at Scripture about unbelief.

Isaiah 53:1, “Who has believed what he has heard from us? And to whom has the arm of the Lord been revealed?

“37 Though he had done so many signs before them, they still did not believe in him, 38 so that the word spoken by the prophet Isaiah might be fulfilled:

“Lord, who has believed what he heard from us,
and to whom has the arm of the Lord been revealed?”

Jesus Christ performed many miracles and taught many large crowds in several towns. And yet, Scripture records that many still did not believe him. Their unbelief kept them from following the Messiah they had been hoping and waiting for.

Unbelief caused many Jewish leaders to plan and scheme a way to kill him.

And as he hung on the cross, they shouted and hurled insults at Jesus, the promised Messiah. Even then, as the earth shook and the day grew dark, they still didn’t believe Jesus was the Son of God prophesied hundreds of years before his arrival.

Some need to see with their eyes to believe in something. Others need not see but choose instead to believe by faith.

The unbelief was real then, and it’s real now. Where do you stand?

The God of the Bible

Pierced For Our Transgressions