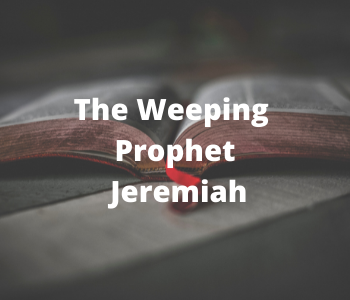 In this special edition, we are looking at the prophet known as the weeping prophet – Jeremiah.

I put together a first-hand account for a Bible study class I taught some years ago. I wanted the women in the class to hear it from Jeremiah’s perspective, using Scripture, what God had called Jeremiah to do. I also wanted the women to understand how Jeremiah felt and what he experienced based on Scripture.

Following are snippets from the piece I wrote several years ago. Please note that the personal accounts are from passages in the book of Jeremiah. They are facts I discovered while reading the book.

Jeremiah 1:1, “Jeremiah son of Hilkiah, one of the priests at Anathoth in the territory of Benjamin.”

I was called to announce the destruction of the kingdom of Judah, my people, and to proclaim the end of an era.

Jeremiah 1:4, “The word of the LORD came to me, saying, 5 “Before I formed you in the womb I knew[a] you,
before you were born I set you apart; I appointed you as a prophet to the nations.”
6 “Alas, Sovereign LORD,” I said, “I do not know how to speak; I am too young.” 7 But the LORD said to me, “Do not say, ‘I am too young.’ You must go to everyone I send you to and say whatever I command you. 8 Do not be afraid of them, for I am with you and will rescue you,”

17, “Get yourself ready! Stand up and say to them whatever I command you. Do not be terrified by them, or I will terrify you before them.”

Jeremiah 2: “The word of the LORD came to me: 2 “Go and proclaim in the hearing of Jerusalem:
“This is what the LORD says:
“‘I remember the devotion of your youth, how as a bride you loved me and followed me through the wilderness, through a land not sown. 3 Israel was holy to the LORD, the first fruits of his harvest;
all who devoured her were held guilty, and disaster overtook them,’” declares the LORD
What fault did your ancestors find in me, that they strayed so far from me?
They followed worthless idols and became worthless themselves.”

The Lord would speak to me and ask me questions. He would tell me what was happening. Finally, the Lord told me I must not marry or have children in the land because those people would die of deadly diseases, so I went through life alone without comfort and support from family.

I didn’t have many friends; my closest friend was named Baruch, who wrote stuff down for me. Then God would ask me to tell them something else.

God asked me to speak to them many times and relay similar repentance messages, asking them to turn from their worthless idols. But the people continued to ignore me, thus ignoring God.

Then God asked me to tell them about a force coming out of the north, a lion, and a destroyer of nations.

Jeremiah 4:14, “Jerusalem wash your evil hearts and be saved.”

Jeremiah 4:18, “Your own conduct and actions have brought this on you. This is your punishment. How bitter it is! How it pierces to the heart!” Oh, my anguish, my anguish! I writhe in pain. Oh, the agony of my heart! My heart pounds within me, I cannot keep silent. For I have heard the sound of the trumpet; I have heard the battle cry. 20 Disaster follows disaster; the whole land lies in ruins. In an instant my tents are destroyed, my shelter in a moment. 21 How long must I see the battle standard and hear the sound of the trumpet?”

Details of his daily life

Then the Lord asked me to go up and down the streets looking for one righteous person. I thought surely the leaders would remember the Lord, but they did not; they weren’t any better.

The Lord would bring distant nations down to fight and destroy our land. And this continued day and night.

Twenty-three years have gone by, and I’m halfway through my ministry. I have spoken the word of the Lord, and still, the people refuse to turn from their wicked ways. I told them the King of Babylon would come and exile the people, and they would be there for 70 years. God would then punish the king.

One day I was speaking the word of the Lord, and a gang of people threatened to kill me. They said I should die because of my prophecy. However, a man named Ahikam supported me, so I was not put to death.

I spent many days counteracting the false prophets in the land who were misleading the people. They were lying to the people about what would happen.

My people were taken into exile. God had me write them a letter in 597bc. Perhaps you have read it in Jeremiah 29?

“After 70 years are completed for Babylon, I will come to you and fulfill my promise to bring you back to this place. For I know the plans I have for you, declares the Lord, plans to prosper you and not to harm you, plans to give you a hope and a future. Then you will call on me and come and pray to me, and I will listen to you.”

The Lord then instructed me to write in a book all the words I have spoken to you.

Jeremiah 30:3, “The days are coming,’ declares the LORD, ‘when I will bring my people Israel and Judah back from captivity and restore them to the land I gave their ancestors to possess, says the Lord.”

The rest of the story

In the 10th year of Zedekiah, king of Judah, and the 18th year of Nebuchadnezzar, the army and king of Babylon were besieging Jerusalem. King Zedekiah had confined me to the courtyard because of the things I had been prophesying. The Lord told me my cousin would come to me about buying his field because I was the nearest relative, and it was my duty, so I did.

The Babylonian army had withdrawn from Jerusalem because of Pharaoh’s army. So I started to leave the city to go get my share of the land. But when I reached the Benjamin Gate, the guard arrested me because he thought I was trying to leave with the Babylonians. Despite my pleas, he took me to the officials who beat me and imprisoned me in the house of Jonathan, the secretary which they had made into a prison. They put me into a dungeon, where I remained for a long time.

While in there, King Zedekiah came and asked if I had any word from the Lord, which I did, and told him the news. Then I asked him what crime I had committed that I would be stuck there. He heard my petition and had me moved to the courtyard, where I received a loaf of bread each day. I continued to prophesy what the Lord was telling me to say to the people.

Well, some men heard this, and it made them very angry. They thought I should be put to death because I wasn’t seeking the good of the people. The king didn’t care what they did, so they took me and lowered me into a cistern. There was no water, only mud. Someone saw what happened, and the next thing I know, 30 men were lowering old rags and worn-out clothes down to me and asked me to wrap them under my arms so they could lift me out.

The King asked me again what would happen to him and the people, and I told him.

I stayed in the courtyard until the day Jerusalem was captured. The siege had lasted over two years. The Babylonians came in and released me from the courtyard. They were instructed not to harm me. I was bound in chains and on my way to Babylon with the rest of the exiles. The commander of the guard released me and told me to go live wherever I wanted. He gave me provisions and a present and let me go. So I went and stayed with the people who were left in the land. The king had left a remnant behind in Judah under the authority of a king he chose.

I continued to prophesy, and even then, there were still people in the lower parts of Egypt who were worshipping other gods. I again prophesied to them to repent. The Lord spoke to me to advise the King of Babylon would come against Egypt, and it would fall.

The Lord spoke to me several more times about other various cities. He then spoke to me about how Babylon would eventually fall and never be inhabited again.

The Assyrians destroyed the northern kingdom in 722BC, and Nebuchadnezzar finally destroyed Jerusalem in 586BC, almost 136 years later.

I sent Seraiah to Babylon to read all the words on my scroll aloud. I told him when he finished to tie a stone to it and throw it in the Euphrates River. Then tell them how that will happen to them.

If you want to read about everything that happened in detail, read 1 and 2 Kings. You can also read the book penned by me and my friend Baruch, my closest friend.

I hope you enjoyed today’s lesson on the life of Jeremiah the prophet. He lived a fascinating life and was faithful to the Lord no matter what anyone else thought.