Verse Of The Day – Corruption Is Everywhere 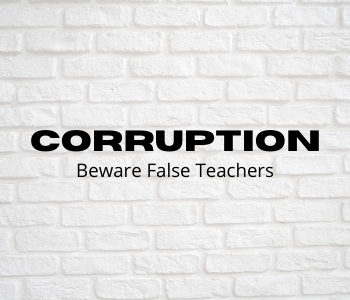 Corruption. Welcome to today’s world. Perhaps we are more familiar with corruption today because we have instant access to news stories on the internet 24/7.

“For speaking loud boasts of folly, they entice by sensual passions of the flesh those who are barely escaping from those who live in error. They promise them freedom, but they themselves are slaves of corruption. For whatever overcomes a person, to that he is enslaved.

For if, after they have escaped the defilements of the world through the knowledge of our Lord and Savior Jesus Christ, they are again entangled in them and overcome, the last state has become worse for them than the first.

For it would have been better for them never not to have known the way of righteousness than after knowing it to turn back from the holy commandment delivered to them. What the true proverb says has happened to them: “The dog returns to his vomit,“ and “the sow after washing herself, returns to wallow in the mire.“

Who is the “they?” – False teachers who have a destructive influence on others.

False teachers make all kinds of promises and often deliver nothing. They promise freedom from moral constraints to new converts who have barely escaped their life before Christ and who hardly know anything.

My footnote says the writer, Peter is speaking of false teachers who have learned about Christ and how to be saved and have even been positively influenced by other Christians but then reject the truth and return to their own sin. There is a question as to if they were genuinely saved.

Better before or after?

Like a person sinking in quicksand who refuses to grab the rope thrown to him or her, the one who turns away from Christ cast aside his or her only means of escape.

Don’t get caught up in the corruption of false teachers and leaders who look and sound Christ-like but do not live authentic Christ-like lives.

You Reap What You Sow

Verse Of The Day – Confession of Hope

Verse Of The Day – Fear – A Tool Of The Enemy