Billy Graham – Excerpts of a Sermon from the 1950’s 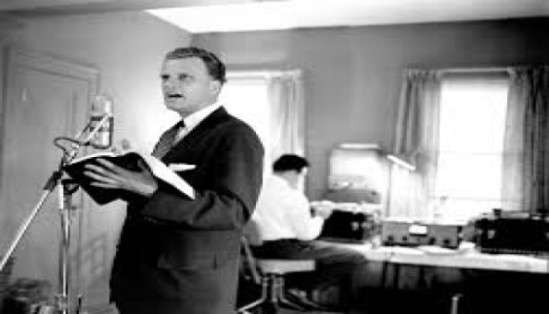 The following are some excerpts from a sermon Billy Graham delivered in the 1950s. If there is anything I have learned, it’s that Billy didn’t mix words or beat around the bush. I love his effortless style and right to the point delivery.

Check out a sample of one of his powerful sermons and see if you feel the same way.

“If you should ask a man the direction to New York City and he said, “Oh, just take any road you wish, they all lead there,” you would question either his sanity or his truthfulness. Somehow, we have gotten it into our minds that “all roads lead to heaven.” You hear people say, “Do your best,” “Be honest,” and “Be sincere—and you will make it to heaven all right.”

But Jesus Christ, who journeyed from heaven to earth and back to heaven again—who knew the way better than any man who ever lived—said, “Enter ye in at the strait gate: for wide is the gate, and broad is the way, that leadeth to destruction, and many there be which go in thereat: because strait is the gate, and narrow is the way, which leadeth unto life, and few there be that find it” (Matt. 7:13,14).

Jesus was narrow about the way of salvation.

In this sermon snippet, Billy Graham explains Jesus’ teaching on the narrow gate.

He plainly pointed out that there are two roads in life. One is broad—lacking in faith, convictions, and morals. It is an easy, accessible, careless way. It is the way of the crowd, the way of the majority, the way of the world. He said, “Many there be that go in thereat.” But he pointed out that this road, easy though it is, famous though it may be, heavily traveled though it is, leads to destruction. And in loving, compassionate intolerance, he says, “Enter ye in at the strait gate … because strait is the gate and narrow is the way which leadeth unto life.”

Christ was so intolerant of man’s lost estate that he left his lofty throne in the heavenlies, took on himself the form of man, suffered at the hands of evil men, and died on a cross to purchase our redemption. So severe was man’s plight that he could not look upon it lightly. With the love that was his, he could not be broadminded about a world held captive by its lusts, its appetites, and its sins.

Having paid such a price, he could not be tolerant about man’s indifference toward him and the redemption he had wrought. He said, “He that is not with me is against me” (Matt. 12:30). He also said, “He that believeth on the Son hath everlasting life, and he that believeth not the Son shall not see life, but the wrath of God abideth on him” (John 3:36).

He spoke of two roads, two kingdoms, two masters, two rewards, and two eternities. And he said, “Ye cannot serve God and mammon” (Matt. 6:24). We have the power to choose whom we will serve, but the alternative to choosing Christ brings certain destruction. Christ said that! The broad, wide, easy, popular way leads to death and destruction. Only the way of the Cross leads home.

The popular, tolerant attitude toward the gospel of Christ is like a man going to watch the Braves and the Dodgers play a baseball game and rooting for both sides. It would be impossible for a man who has no loyalty to a particular team to really get into the game.

Baseball fans are very intolerant in both Milwaukee and Los Angeles. If you would cheer for both sides in Los Angeles or Milwaukee, someone would yell, “Hey, make up your mind who you’re for.”

Christ said, “Ye cannot serve God and mammon … no man can serve two masters” (Matt. 6:24). One of the sins of this age is the sin of broad-mindedness. We need more people who will step out and say unashamedly, “As for me and my house, we will serve the Lord” (Josh. 24:15).

Jesus was intolerant toward sin

Christ was “so intolerant of sin that he died on the cross to free men from its power. “For God so loved the world, that he gave his only begotten son, that whosoever believeth in him should not perish, but have everlasting life” (John 3:16). Sin lies at the root of society’s difficulties today. Whatever separates man from God disunites man from man. The world problem will never be solved until the question of sin is settled.

But the Cross is God’s answer to sin. To all who will receive the blessed news of salvation through Christ, it forever crosses out and cancels sin’s power. Forest rangers know well the value of the “burn-back” in fighting forest fires. To save an area from being burned, they simply burn away all of the trees and shrubs to a safe distance; and when the fire reaches that burned-out spot, those standing there are safe from the flames. Fire is thus fought by fire.

God is intolerant of sin. That intolerance sent his Son to die for us. He has said, “that whosoever believeth in him shall not perish.” The clear implication is that those who refuse to believe in Christ shall be eternally lost. Come to him today, while his Spirit deals with your heart!

If you read this and you have never given your heart over to Jesus, let this be the day you allow the Spirit to deal with your heart!

The Confidence of Billy Graham

A Prayer for You

Prayer: Let’s Talk About It