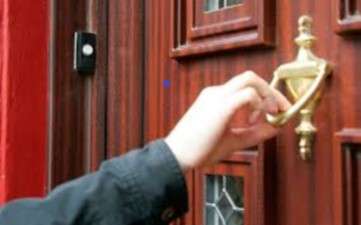 Previously, we left off with my friends reassuring me everything would be fine. All I had to do was listen and learn, watch from a distance as my team mates proceeded to each door. The wife was a lot more outgoing than her hubby. She had no qualms about knocking on doors, introducing herself and asking for prayer requests. Her hubby was the protector. If anyone seemed threatening, he was there to save the day. I had no problems with either of their roles. After all, my job was to observe the process- my self assigned duty.

And so began our task of the I-4 team. We loaded up and drove to our first destination. When we arrived, as planned (my plan), I hung back and took it all in, watching and listening.

My friend walked to the door, knocked, and behold, a human answered the door. Imagine that! She immediately went into explanation of why we were there, and the lady accepted our offer of prayer graciously.

We’re on a roll

This went on for more than an hour. I was really surprised by how many people were willing to share their prayer requests with complete strangers. Some had been praying God would send someone by to pray with them. Others had a really bad day and needed to tell someone the details. Some opened their doors, beer in one hand, cigarette in the other, some scantily dressed, but all very pleasant and open. Some invited us into their homes. All the while, we were getting to prayer with them for whatever their request. At the very least, we struck up conversation and showed them it didn’t matter who they were or how they looked, our message was the same. Jesus is for everyone – He is indeed.

I’m not sure why I use “we”. After all, my friends did all the talking.

I remember her knocking on this one door and an older gentlemen answered the door with a beer in his hand. We explained where we were from and he immediately told us how angry he was at God. He followed up his statement with agitation saying, “And God knows how angry I am with him! I’ve been this way for a long time now. He knows! He knows! Oh He knows! He and I have had this thing going for quite some time now.” He paced nervously back and forth.

He was the son of a Baptist preacher. This man grew up in church, but this day he was mad at God.

He quoted scripture to us from the Bible, the book of Matthew, as we stood there. Matthew 10:14, “If anyone will not welcome you or listen to your words, shake the dust off your feet when you leave that home or town.”

He motioned for us to go on, and shake the dust off our feet.

We politely listened to him and tried to meet him where he was – in a place of pain. We stood there with him for over twenty minutes. As of today, we don’t know what happened to him and if he ever released his anger. We prayed he did that day.

God can handle it

I can understand being angry at God.  I have been there myself before and it’s a very real thing. But as my former pastor said to me one time, “God knows you are angry with Him, but do yourself a favor – don’t stay angry for very long or you will miss out on what God has for you. Jeanette, you will miss out on His blessings.”

Boy, was he right about that. I had stewed for about three weeks over something very painful in my life and when I let it go, the flood gates opened and my life has never been the same since. Here I sit writing to you folks many years later about the blessings in my life.

Lord, I thank you for the opportunity we were given many years ago to reach out to others and pray for people in our neighborhoods. We met some great people during that time, some people who were really struggling in life. God, you put us in the right place at the right time. You still do. Thanks so much for that. Love you bunches. In Jesus’ name I pray, Amen.

In His Service,
Jeanette Duby, The Teaching Lady

Knock Knock Joke for You

Cartwheel – Gymnastics is not my Gift

Knock Knock Joke for You- Only I’m Not Laughing