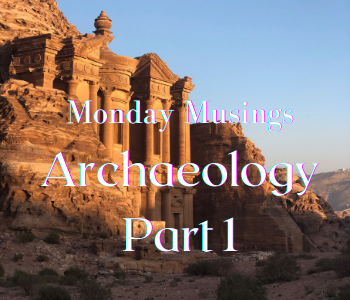 Let’s think about archaeology. What do we know about archaeology? Before reading the Bible, I honestly didn’t think about the subject. I think the closest I ever came to digging up bones was at Animal Kingdom, Walt Disney World. They have a dino exhibit where children can dig for fake dinosaur bones buried beneath the sand. But there have been some major archaeological finds that need to be considered.

Did you know that there are real archaeological digs currently taking place in the Middle East? That’s right – in Israel. The Israel Ministry of Foreign Affairs is just one group that sets up digs and excavations throughout the year. They choose specific locations and supply the information, work schedule, and program dates.

I understand some think the Bible is a book of fairy tales and a bunch of false narratives.

“How could any of it be true? How could there be a God who created the first man and woman? And this Jesus you speak of? Raised from the dead? Not possible.”

But what if archaeology proves the people mentioned in the Bible did exist thousands of years ago? What if these archaeological digs help prove that buildings and buried cities from Bible times did exist? What if these digs prove the Bible is not a fairy tale?

It’s not my job to convince you; it’s to share the information I find for your consideration.

From the Israel Ministry of Foreign Affairs

Engraved in stone, the 1,500-year-old Greek inscription is part of a lintel originally set in the frame of a church entrance from the late Byzantine period.
Israeli Antiquities Authority excavations in the village of et-Taiyiba in the Jezreel Valley​ recently unearthed an inscription dedicated to Jesus, the son of Mary. The Greek inscription, engraved in stone, comes from the frame of an entrance door dating from the Byzantine period (late fifth century CE).
It was discovered incorporated in secondary use in one of the walls of a magnificent building dating from the Byzantine or Early Islamic period, where the excavations uncovered two rooms containing mosaic pavements with a geometric design.
The inscription was recovered in an archaeological excavation directed by Tzachi Lang and Kojan Haku of the Israel Antiquities Authority prior to the construction of a road inside the village.
As part of the Israel Antiquities Authority’s policy of increasing public interest in archaeology, students, volunteers, and workers from the local community participated in the excavation.

I obtained the following information from the Israel Antiquities Authority. My Bible Dictionary records many pieces of archaeological artifacts.

Let’s start with a definition from the Bible Dictionary. Originally Published 1963 by Merrill C. Tenney

“Dead Sea Scrolls were discovered in AD 1947 by a Bedouin and brought to the attention of the scholarly world late that year and early in 1948. The discoveries were made in caves located in the marly cliffs a mile or so west of the NW corner of the Dead Sea, at a place known by the modern Arabic name of Qumran, which is near a copious spring of fresh water known as Ain Feshkha. This location is at the eastern edge of the Wilderness of Judah.

The scrolls were seen by several scholars in the latter part of 1947, some of whom have admitted that they passed them up as forgeries. One of the scholars who recognized the antiquity of the scrolls was the late Professor Eleazar L. Sukenik of Hebrew University, who was subsequently successful in purchasing some of them.

Other scrolls were taken to the American School of Oriental Research in Jerusalem, where the acting director, Dr. John C. Trever, was convinced of their value and arranged to photograph the portions that were brought to him. One of his photographs was sent to Professor William F. Albright, who promptly declared that this was “the most important discovery ever made in OT manuscripts.”

The Dead Sea Scrolls were first exhibited in the Library of Congress in Washington in 1993.

The Scrolls have been exhibited in four continents, yet there are still many new requests to host the Dead Sea Scrolls exhibition. Consequently, the Israel Antiquities Authority must balance its interest in exhibiting the Scrolls with its duty to conserve and preserve them in optimal conditions. This is accomplished by displaying only selected scroll fragments for short periods of time.
The main focus of the Scroll exhibition is the fragments of the scrolls themselves, representing the books of the Hebrew Bible as well as sectarian writings and “extra-biblical” (apocryphal or pseudepigraphical) literature. The Scrolls are accompanied by related archaeological finds from the nearby site of Qumran. These simple artifacts, representing the material culture of the inhabitants, reflect the social tenets. That can be compared with artifacts from other contemporary sites. The exact composition of the exhibition varies from place to place and tries to keep pace with the most current research and discoveries.

Another item of interest about the Dead Sea Scrolls

Qumran and the Scrolls:
None of the scrolls discovered in the Qumran area were found at the site itself, but rather in the nearby caves, some at a distance of one km from the site. If we are correct in assuming that the site first served as a military fortress and afterwards as a center for the production of pottery and date honey, the question arises: where did the scrolls come from, and who brought them to the caves?
We maintain that these scrolls had no connection with the site, and they were brought by refugees who had fled during the Jewish revolt against the Romans, from different settlements in Benjamin and Judah, and possibly from Jerusalem, as well. These exiles brought their books with them in their flight, moving along the trails that led south and east from Jerusalem toward the Judean Desert.
Many of them arrived at Qumran, where, lacking a land route to continue their flight southward, they buried the scrolls in the caves around the site before continuing their journey by boat on the Dead Sea. It seems that other refugees came with their books to Masada, which would explain the presence of the scrolls at this site, as well.
Next week, we will look at some more archaeological finds made in the State of Israel that lend credibility to the Bible. I hope you’ll come back.
Blessings!
The Teaching Lady
Bible Gateway
Prophecies Of The Messiah – Born Of A Virgin
Jesus Christ – Background Info Q#5

Prophecies Of The Messiah – Tribe of Judah

Declared The Son Of God – Prophecy