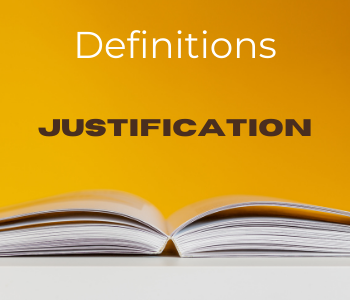 Welcome to Monday Musings, where the topic can be about anything related to inside and outside the church. Today’s topic? Justification.

Which comes first? Sanctification or justification. It’s like the chicken and the egg? Which one came first?

What is justification? I searched several resources to explain the word, and I will share those with you now, but first, let’s look at some passages of Scripture.

24 and are justified by his grace as a gift, through the redemption that is in Christ Jesus, 25 whom God put forward as a propitiation by his blood, to be received by faith. This was to show God’s righteousness, because in his divine forbearance he had passed over former sins. 26 It was to show his righteousness at the present time, so that he might be just and the justifier of the one who has faith in Jesus.

27 Then what becomes of our boasting? It is excluded. By what kind of law? By a law of works? No, but by the law of faith. 28 For we hold that one is justified by faith apart from works of the law. 29 Or is God the God of Jews only? Is he not the God of Gentiles also? Yes, of Gentiles also, 30 since God is one—who will justify the circumcised by faith and the uncircumcised through faith. 31 Do we then overthrow the law by this faith? By no means! On the contrary, we uphold the law.”

The central thought in justification is that, although people clearly and totally deserve to be declared guilty, God declared them righteous because of their trust in Christ.”

“Justification may be defined as “that judicial act of God by which, on the basis of the meritorious work of Christ, imputed to the sinner and received through faith, God declares the sinner absolved from sin, released from its penalty, and retired as righteous.

Expressed simply, it is being placed by God in a right relationship with himself. The doctrine is found in Paul’s letters, chiefly those to Galatia and Rome.

The Nature of Justification

As a reversal of God’s attitude toward the sinner, because of the sinner’s new relation in Christ, justification is:

(4) a restorative act by which the forgiven sinner is restored to favor through the imputation of Christ’s righteousness.

The major emphasis in justification is that it is an act of God.

The ground on which justification stands is the redeeming work of Christ’s death.

The final ground of justification is the completed, finished, sufficient work of Christ atoning for the sinner in his redeeming work on the cross.”

Justification is by faith, not by works. God justifies all by faith. Therefore, it makes sense that if justification is a gift that springs from God’s grace, then boasting in one’s own ability to obtain it or maintain it is excluded.

So, which came first? Sanctification of justification?

If sanctification means, “being holy or becoming holy; a growing in holiness; the process of becoming sanctified, holy, consecrated to God; set apart from sin,” and justification means, “it is being placed by God in a right relationship with himself,” which one comes first?

It is a gift from God. When we are in right relationship with God, we are to become holy as he is holy. Furthermore, we are to shed the old self and take on a new self, growing in Christ each day.

Next week in Monday Musings, we will look at the definition of glorification. Until then, check back again for another installment on Bible prophecies fulfilled by the Messiah. It’s good stuff!

Monday Musings – What Does Sanctification Mean?

Prophecies Of The Messiah – Born Of A Virgin

Prophecies of the Messiah – Heir To The Throne