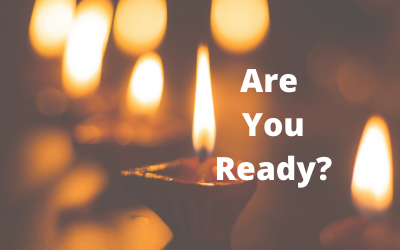 “At that time the kingdom of heaven will be like ten virgins who took their lamps and went out to meet the bridegroom. Five of them were foolish and five were wise. The foolish ones took their lamps but did not take any oil with them. The wise ones, however, took oil in jars along with their lamps. The bridegroom was a long time in coming, and they all became drowsy and fell asleep.

“At midnight the cry rang out: ‘Here’s the bridegroom! Come out to meet him!’ “Then all the virgins woke up and trimmed their lamps. The foolish ones said to the wise, ‘Give us some of your oil; our lamps are going out.’

“‘No,’ they replied, ‘there may not be enough for both us and you. Instead, go to those who sell oil and buy some for yourselves.’

“But while they were on their way to buy the oil, the bridegroom arrived. The virgins who were ready went in with him to the wedding banquet. And the door was shut.

“Therefore keep watch, because you do not know the day or the hour. Matthew 25:1-13

Matthew records this parable taught by Jesus. Let’s look at the parable highlights, and gather from it what we are supposed to learn if anything. My notes are from a biblical commentary.

Jesus warned his followers that the day and hour are unknown; therefore, they must always be ready. The five virgins who planned poorly missed out. The wise virgins took extra oil and were ready for the unexpected delay.

We read in the parable the wise virgins did not share their oil with the foolish virgins. Each of them is responsible for themselves.

I don’t know about you, but I am thankful for the warning to pay attention and be prepared. Unfortunately, many people are not ready and will not be ready when the Lord returns.

2020 more than any year prior in my life, has definitely been a year that has begged us to get ready. Many people have used this year to reevaluate where they stand with the Lord and have adjusted accordingly.

I believe we should be paying close attention. The Lord could rapture his church at any time. Are you ready? I sure hope so.