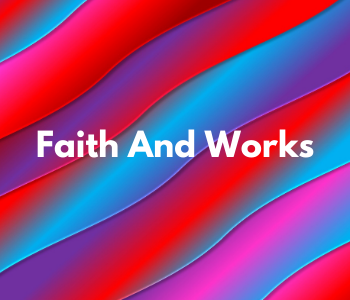 Yesterday, I started with a few questions – What is the value of good works? Have you ever neglected good works, content to sit back and let someone else do the work? Do faith and works go together?

I have to admit that this has been one of the more challenging scriptures to break down and explain. Part of that could be because we also need to look at what the Apostle Paul says about faith and works to understand it better which I referred to in Part 1. I need to do more research on Paul’s stance which will be in another post.

Let’s review our verses again from yesterday. They come from James 2:14-18.

“What good is it, my brothers, if someone says he has faith but does not have works? Can that faith save him? If a brother or sister is poorly clothed and lacking in daily food, and one of you says to them, “Go in peace, be warmed and filled,” without giving them the things needed for the body, what good is that? So also faith by itself, if it does not have works, is dead.”

When I don’t understand passages, I read commentaries and read more than one to reach a consensus. I want to understand what the passages mean in their proper context.

James starts with two questions that appear to declare that faith not accompanied by good deeds is of no saving value whatsoever. He then gives the reader a hypothetical scenario to consider of a person who claims to have genuine saving faith.  He doesn’t say the person doesn’t have faith but asks if such faith can save him?

My commentary says, “Genuine faith is a commitment of regeneration and therefore affects the believer’s behavior. Without the regeneration, it is superficial and spurious.”

The scenario is of someone who is in dire need. This person is desperate.

The statement, “Go in peace,” was a standard Hebrew farewell. The translation”keep warm and well fed” may be somewhat misleading in suggesting that the person is already warm and fed, which is not the case. Instead, the meaning would be for them to go and get some food and warm clothing.

James asks, “what good is that?” The person appears to be concerned but does nothing about it. Seeming concerned for the welfare of that person is worthless and fake.

The last verse, “So also faith by itself, if it does not have works is dead.” Works is another word for action. Action is the proper fruit of living faith.

My commentary says, “Because life is dynamic and productive, faith that lives will surely produce the fruit of good deeds. Therefore, if no deeds are forthcoming, it is proof that the professed faith is dead. Notice that James does not deny that it is faith. He indicates that it is not the right kind of faith. It is not living faith, nor can it save.”

“The point he is trying to make is that works are necessary to prove that a person has faith. Faith cannot be demonstrated apart from action. Fath is an attitude of the inner man, and it can only be seen as it influences the actions of the one who possesses it. A mere profession of faith proves nothing as its reality; only action can demonstrate faith’s genuineness.”

Sorry for the length of this one today. I hope it provides more understanding of the passages above. I need to do more analysis of the Apostle Paul’s words on faith and works. Be on the lookout for that verse of the day.

Verse Of The Day: Faith And Works

Verse Of The Day: The Thief Wants You

Verse Of The Day – Even The Demons Shudder