Verse Of The Day – Even The Demons Shudder 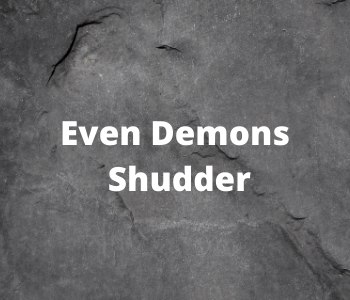 I don’t know if you have had the opportunity to watch a mini-series titled, The Chosen”, but this mini-series opens with a woman who is possessed by seven demons. A highly esteemed Pharisee is summoned to rid her of these evil spirits. Let’s just say it doesn’t go well.

It is quite frightening to think there are real demons globally, but I believe there are, and we know from reading the Bible, demons existed hundreds of years ago during Jesus’ day. Jesus’ death on the cross and his resurrection did not erase demons and their existence on earth.

Our verse of the day comes from James 2:19

“You believe that God is one; you do well. Even the demons believe – and shudder!”

To understand this passage, we need to look at the context of the verse. James is continuing to make his case to his fellow brethren about faith and works.

We have been looking at verses 14 through 18 of this same chapter for the last two days. Verse 19 continues with James making a second argument regarding faith and works. Check out the last two days for insight into James’ first argument.

James recognizes that his brethren believe that God is one. That is great news. All faithful Jews believed the creed known as the Shema found in Deuteronomy 6:4, “Hear, O Israel: The Lord our God, the Lord is one.”  He commends them for believing there is one God. But such acceptance of a creed is not enough to save a person.

To prove his point, James declares that “even demons believe” the Shema.

My commentary says, “They know that there is but one God, and as a result, they “shudder.” The Greek term phrisso describes a shudder that results from fear. That the demons so respond to the fact of God is evidence that their belief is a thorough conviction. However, their response is also evidence that their faith is not a saving faith, for they are terrified at the thought of God.

Belief has not brought them peace with God. Saving faith, then, is not mere intellectual acceptance of a theological position. It goes much deeper, involving the whole inner man and expressing itself outwardly in a changed life.”

Next time, we will look at James’ third argument on faith and works. Thanks for stopping by today. I appreciate you taking the time. If you want to find out what happens to the demon-possessed woman, check out “The Chosen,” or better yet, read her story in the Bible, the Gospel of Luke, chapter 8.

Verse Of The Day – Is Your Faith Dead?