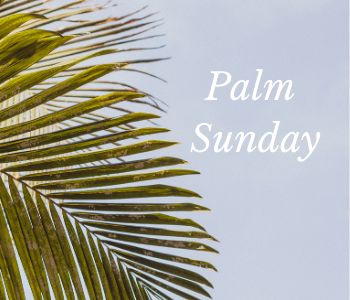 We are taking a small detour from our discussion on faith and works. However, we will resume that discussion next week. Today we celebrate Palm Sunday. For the non-believer, it’s another day that may look no different than any other day. But for believers, we know this represents the start of Holy Week as we remember the last week of Jesus’ life before going to the cross.

“The next day, the large crowd that had come to the feast heard that Jesus was coming to Jerusalem. So they took branches of palm trees and went out to meet him, crying out, “Hosanna! Blessed is he who comes in the name of the Lord, even the King of Israel!

And Jesus found a young donkey and sat on it, just as it is written, “Fear not, daughter of Zion; behold your king is coming, sitting on a donkey’s colt!” His disciples did not understand these things at first, but when Jesus was glorified, then they remembered that these things had been written about him and had been done to him.

The crowd that had been with him when he called Lazarus out of the tomb and raised him from the dead continued to bear witness. The reason why the crowd went to meet him was that they heard he had done this sign. So the Pharisees said to one another, “You see that you are gaining nothing. Look, the world has gone after him.”

Strongs Concordance says the Greek meaning of the word “Hosanna” means: oh save!; an exclamation of adoration. Some commentaries say the word means: salvation.

Palm branches were used in many celebrations of victory and were symbols of Jewish nationalism.

Many pilgrims came from the countryside and gathered for the Passover festival. Based upon the Scripture above, many of those pilgrims were familiar with Jesus. Some of them saw the miracles he performed, like the raising of Lazarus from the dead. Others heard his teachings. Moreover, many believed he was the one they had been waiting for – the promised Messiah.

The people who gathered in Jerusalem for the Passover festival had no idea what the week would bring.

The disciples didn’t understand what was happening despite Jesus telling them three times what would happen to him.

The Pharisees saw the excitement and curiosity in the people’s eyes and knew it wasn’t for them. This angered them even more, and they were determined to do something about it.

Something big is coming.

We have several groups of people in Jerusalem for Passover week. The stage is being set for what is to come, and the only one who truly knows what is going to happen is Jesus.

Stop by tomorrow for what happens next.

Blessed is he who comes in the name of the Lord! Hosanna!

As we celebrate Palm Sunday, remember why we celebrate. Give thanks to the Lord, for he is good, and his love endures forever.

Verse Of The Day: Is Your Faith Dead?

Verse Of The Day – Is Your Faith Dead?