Water – In The Beginning

Water – In The Beginning

I am so thankful for water – to drink, shower, wash, and cook.

Yesterday as I was walking around the office parking lot, I thought of all the rain we have had over the past couple of months.

My mind then went to water – oceans, seas, lakes, streams, creeks, rivers, springs, puddles, wells, and water from the tap as well as the bottle.

I started thinking about creation, and my mind went back to Genesis 1:1-2, “In the beginning, God created the heavens and the earth. Now the earth was formless and empty, darkness was over the surface of the deep, and the Spirit of God was hovering over the waters.”

Genesis 1:6-8, “And God said, “Let there be a vault between the waters to separate water from water. So God made the vault and separated the water under the vault from the water above it. And it was so. God called the vault sky. And there was evening, and there was morning – the second day.

Genesis 1:9-10, “And God said, “Let the water under the sky be gathered to one place, and let dry ground appear. And it was so. God called the dry ground “land” and the gathered waters he called “seas.” And God saw that it was good.”

Job 38:8-11, “Who shut up the sea behind the doors when it burst forth from the womb, when I made the clouds its garment and wrapped it in thick darkness, when I fixed the limits for it and set its doors and bars in place, when I said, “This far you may come and no farther; here is where your proud waves halt?”

Today, many call those same seas – oceans. I like the word ocean myself when I look out over the horizon as I am standing on the seashore.

Memories on the water

I have traveled by boat to a few tourist destinations in my life. One thing I pay attention to is the surface of the ocean. Not only am I standing on a hefty object cruising along on the top of the sea, but I am well aware of what is below the water.

And I have also noticed that as I travel from place to place on the ocean, the color of the water changes. I find it fascinating that the sea can be different colors depending on what’s below the surface, and yet those colors never cross the lines and mix. 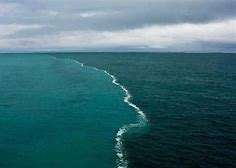 I saw several pictures online from various places in the world where two bodies of water meet. The colors and distinctions are breathtaking. It’s artistry at it’s finest.

The other thing that amazes me s the depth of those bodies of water. Can you imagine that much water in one place having the ability to exist in this matter? The ocean is mighty, and yet, the two bodies of water never give way to the other. Admittedly, I don’t fully understand.

Then I started thinking about the various types of fish who live beneath the ocean surface.

I remember all the pet fish I had as a kid and young adult. One thing my dad always told me when we went to the pet store was saltwater fish could never swim in freshwater tanks and visa versa. We had freshwater tanks, so I knew I could shop from the freshwater tanks only despite the beautiful colors living in the saltwater.

Today, I looked up why you can’t mix the two, and there’s something called “hypertonic cells” in saltwater fish that help keep more salt inside the cells. It says that if you put a saltwater fish in freshwater, the water will rush into their cells and kill them.

Some exceptions regarding water

There are a few fish who can live in both. Experts say the sockeye salmon can tolerate both. Isn’t that fish beautiful?

Brackish water is a mixture of freshwater and saltwater. It has more salt than fresh, but not as much salt as seawater.

All this talk about liquid

I guess what I am trying to say is I stand amazed at all the various applications, sources, and bodies of water that cover the earth.

God, the creator of the world, created something beautiful for all of us to enjoy. He thought of every detail and all aspects and applications.

Why? Because he loves us very much.

Childhood Memory – Whose Team Are You On? Part 2

30 Days to Understanding the Bible – Session #1