Who Is Jesus Christ? I Wanted To Know – Part 3 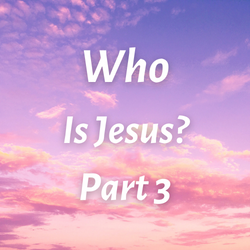 Welcome! I am so glad you stopped by. Let’s learn together. We will spend today’s time doing a little cross-referencing of The Old and New Testaments. In this post today, we continue to look for answers as to who Jesus Christ was, is, and will be in the future.

Do you remember what I said in our prior discussions? Many people believe Jesus was one of three things:

Today, we will look at Old Testament references to Jesus Christ as the coming Messiah alongside New Testament passages that confirm Jesus Christ came and fulfilled those prophecies.

OT – “He is the one who will build a house for my Name, and I will establish the throne of His kingdom forever.” 2 Samuel 7:13 / NT – Matthew 1:1, “A record of the genealogy of Jesus Christ the son of David, the son of Abraham.”

We’ve only scratched the surface.

Are you starting to see what I see as you read these passages?

Scripture from the Old Testament speaks of the coming Messiah, and we can see from Scripture in the New Testament that Jesus Christ fulfills those prophecies.

Can we tie the two together?

Many jews are still waiting for the Messiah to come. He has already come according to the New Testament Scriptures.

The eyewitnesses and the disciples testified and proclaimed his appearance. Jesus appeared to more than 500 people after his resurrection. Jesus is not fake news.

We have a long way to go before we finish the cross-references, but let’s stop here for now. Do yourself a favor and go back and reread the passages from your Bible. Read the footnotes if you have a study Bible. See the words for yourself.

See you next time.

Who Is Jesus Christ? I Wanted To Know – Part 2

Who Is Jesus Christ? I Wanted To Know – Part 2