Birth Pains Are Increasing Around The World 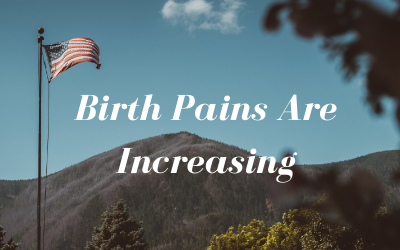 If you have been watching events unfold around the world, you know as well as I do, what is happening overseas and around the world is very troubling. I am not the brightest bulb in the box, but I heard and saw things on the news yesterday that further confirm what I believe to be true. Birth pains are increasing around the world.

I watched the Presidents’ news conference yesterday, and it’s obvious from the multiple questions from hand-picked journalists and all the follow-up commentaries on numerous news channels from both sides of the aisle that we have a big problem. For the first time in years, I see multiple news outlets all uniting over the same thing; America screwed up, and the current leadership is not being honest and doesn’t appear to know what they are doing.

I watched an Australian news organization interview a gentleman from the British parliament yesterday after the big news conference. Both of them expressed their grave concerns over the decision-making of our current leadership and his authenticity compared to on-the-ground reporting and their own missions. Both feel the world is now a more dangerous place, and their respective countries’ leadership needs to reassess their own futures and safety. They no longer feel confident in America’s ability to back them up in a major conflict.

I believe we will see major players on the world stage make moves we haven’t seen in many years. They have been waiting, and the fruit is ripe for the picking.

I also believe we are seeing a world literally shaking.

Am I surprised we have multiple problems in this country? No.

Because for the last 50 plus years there has been a determined effort to remove God from everything and all aspects of life in America. It began in the early sixties when prayer was removed from schools.

How can one stand before his country and ask God to bless our troops when he himself has taken determined steps to go against God’s Word since the day he took office? The two don’t compute.

The world is going through birth pains. With each day that passes, the pain and contractions are increasing in intensity and coming more quickly. All of us who have experienced birth pains know what comes next.

If it’s possible, and it is…

Is it happening in America alone? No. It’s happening around the world. You see a small glimpse into the reality of many people’s lives. Ask those who have served in other countries. They will never forget those images.

Am I surprised by all the evil in the world? No.

But there is hope.

The Lord is not unaware of the current situation in America or around the world. While the enemy is busy causing major upheaval, God is not out of touch or grasping for a plan to move forward. He is way ahead of everyone.

As believers in Jesus Christ, we must trust the Lord and not fear. We must not take matters into our hands but allow the Lord to work in his time. It may feel like the Lord is not working, but Scripture says that a day to the Lord is like a thousand years and a thousand years like a day. (2 Peter 3:8)

Revenge is not ours to take.

2 Chronicles 7:14, “if my people who are called by my name humble themselves, and pray and seek my face and turn from their wicked ways, then I will hear from heaven and will forgive their sin and heal their land.”

Today, recognize that resentment, bitterness, and desire for revenge will only poison your own soul. Your hurt is real, but you must leave it with the Lord. He will bring justice in his way in his time.

As the world continues to experience the ever-increasing birth pains, make every effort to draw closer to the Lord in these unprecedented times. Now is the time. You can’t afford to waste another day. Resting under the shadow of the Almighty is the safest place, and that gives me hope.

Father, we come to you today and ask you to do what only you can do in this world, Lord. Father, I don’t know what that looks like for America because you see everything, so I will trust you as you move throughout our land and this world. Lord, please give me the strength to stand, patience to endure, and hope to cling to as we move another day closer to Jesus’ return. In his name, I pray, amen.

What Comes Out Of Your Mouth First?

Memories That Give Me Hope