Double Dog Dare You To Go Back There – Part One 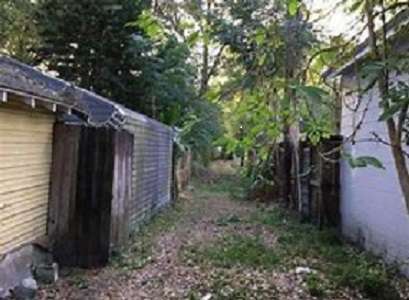 Has anyone ever double dog dared you to do something?

Did they double dog dare you to do it at night?

How did that make you feel? Were you scared? Did you find it thrilling? I don’t know about you, but I would be scared to death.

Allow me to tell you a story about double dog dares.

One night, my friends and I were sitting around in a circle talking as girls do. It was about 10 o’clock at night. Back then we were allowed to stay out late this one night. Anyway, my brother decided to sit with the girls. One of my friends dared him to walk through the back alleyway behind her house – all by himself.

James was eight years old at the time. Even at eight years old, he wasn’t going to let some girl show him up. He gladly accepted the challenge. He was to walk the whole length of the alley, which back then was really long, a whole block. To get there, he had to walk to the end of the street. He couldn’t cut through someone’s yard.

After trading a few jabs with the girl who dared him, he turned and confidently walked to the end of the street. We could no longer see my brother. He faded into the darkness.  An uneasiness filled the air as we picked up where we left off before he sat down. I couldn’t help but worry a little bit.

About twenty minutes later, we heard blood-curdling screams coming from the same alleyway. They lasted about 15 seconds or so.

No one moved a muscle. We sat there frightened, each staring at the other looking for some kind of sign that one of us would go rescue him. Of course, everyone looked at me because he was my brother.

Sorry bro, I’m not going in there. Whoever it was already had one Duby. They’re not getting another, and besides none of my friends were in a hurry to go back there and save him. Surely they wouldn’t be in a hurry to save me either.

About three minutes later, which seemed like forever, James reappeared. I was so excited to see him and he was equally excited to all of us. And of course, he was displaying his manliness for having taken the dare and made it out alive.

The burning question on everyone’s mind – What happened back there?!?!

His answer – “I was running through the alleyway when all of a sudden I ran into barb wired. The barbed wire stung my legs. Look!.”

His pants were ripped slightly, but there was no blood.

We can get into trouble when we wander off alone.

I am reminded of a story in the Bible when I think about my brother running through the alleyway all alone.

In Luke 15, Jesus tells the parable of the lost sheep. The scripture says, “So Jesus told them this parable: “Which one of you if he has a hundred sheep and loses one of them, would not leave the ninety-nine in the open pasture and go look for the one that is lost until he finds it? Then when he has found it, he places it on his shoulders, rejoicing. Returning home, he calls together his friends and neighbors, telling them, ‘Rejoice with me, because I have found my sheep that was lost.’ I tell you, in the same way, there will be more joy in heaven over one sinner who repents than over ninety-nine righteous people who have no need to repent.”

You have to hear the rest of the story.

Stay tuned till next time as Paul Harvey used to say, “The rest of the story.”

Father, thank you for the good shepherd, Jesus. He was wonderful at telling parables to make it easy for us to understand the real message. Thanks for your love and I pray for wisdom for myself as well as those reading this devo. To you be all the honor and glory, Amen.

In His Service,
The Teaching Lady