End Times Stuff – Are We There Yet? Part 2 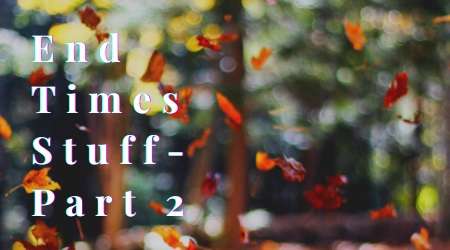 Today, we continue on our trek through 2020, looking at the events of 2020 and what Scripture has to say about them in reference to end times stuff. The last time we were together, we looked at 10 categories. If you are joining us for the first time, I encourage you to check out Part One of this series.

In Part 2, we continue looking at my list of unprecedented events from 2020. I mentioned in Part 1 that I started writing down all the events of 2020. I have 3 pages so far, and we still have two months to go. Yikes!

2020 has been a year, unlike no other in my lifetime, and I would imagine the same goes for you as well. What does it all mean? I don’t know for sure, but one thing I am doing – looking for the Lord’s return more than ever before.

After we go through more of the items from my list, you’ll understand why. I hope you are ready and if you’re not, you should get ready. The Lord could return at any time. Only the Lord knows the day and the hour of His return, so don’t let anyone tell you dates and times.

Let’s pick up where we left off.

11. Satanic imposters – We are seeing a lot of false Christs in the world today. Some Jewish rabbis in Israel claim they have been speaking to the Messiah in the last few months. Jesus warned us in Matthew 24:23, “At that time if anyone says to you, ‘Look, here is the Christ! or, ‘There he is! do not believe it. For false Christs and false prophets will appear and perform great signs and miracles.” Beware.

12. False teachers – We have seen an increase in false teachers in churches in the last several years. There are several pastors and teachers who are not preaching the Word of God, either in person or online. They are preaching a false gospel and misleading their congregations. We have also seen many prosperity gospel pastors, some of who perform false healings and gain great wealth from unsuspecting folks. One has to wonder where they have been since COVID-19 started. It seems their ministries have been pretty quiet. I do not really see an online presence from them either. Maybe I am looking in the wrong place.

2 Peter 2:1-3, “But there were false prophets among the people, just as there will be false teachers among you. They will secretly introduce destructive heresies, even denying the sovereign Lord who bought them…In their greed, these teachers will exploit you with stories they have made up.”

13. Mayflower Compact – November 11, 2020, marks the 400th anniversary of the Mayflower Compact. The Mayflower Compact was the first governing document of the Plymouth colony. The people on the Mayflower were escaping Europe so they could practice their religion freely. 400 years later, in America, we are seeing those similar types of restrictions on churches today. Religious freedoms are being compromised and challenged outright in 2020 here in America – the very country those on the Mayflower escaped to because of religious persecution in Europe. I think 400 years is interesting as the Bible contains many stories about God and how he works in 400-year increments.

14. Safety and peace – 1 Thessalonians 5:3, “While people are saying, “Peace and safety,” destruction will come on them suddenly, as labor pains on a pregnant woman, and they will not escape.”  Everyone is saying they want peace and safety, but many are feeling less safe and less peaceful. There is also talk of the peace treaty signed recently between Israel, the UAE, Bahrain, and soon Sudan. Some are questioning the long term effects of the continuing Abraham Accords and what that will do to peace. Will it last? Will Israel enjoy long-lasting peace and safety?

15. Battle between good and evil – There’s a real battle going on, a spiritual battle between good and evil. The enemy knows his time is limited, so he has pulled out all the weapons. As believers, we need to be dressed for battle. Ephesians 6:13, “Therefore put on the full armor of God, so that when the day of evil comes, you may be able to stand your ground, and after you have done everything to stand.” Are you suited up with the full armor of God?

16. Forming a one-world religion, government, and economy – Have you ever heard of the Great Reset or the New World Order?

You haven’t? Well, you might want to research it for yourself because there is a good bit of information out there on the web.

One thing popped up as of late is an open letter penned to President Trump by Archbishop Carlo Maria Vigano’ dated 10-25-2020. In this letter, he warns the president about the Great Reset. Following is a small snippet of the letter. I would encourage you to read the whole letter and get educated about this topic.

“A global plan called the Great Reset is underway. Its architect is a global élite that wants to subdue all of humanity, imposing coercive measures with which to drastically limit individual freedoms and those of entire populations. In several nations, this plan has already been approved and financed; in others, it is still in an early stage. Behind the world leaders who are the accomplices and executors of this infernal project, there are unscrupulous characters who finance the World Economic Forum and Event 201, promoting their agenda.

The purpose of the Great Reset is the imposition of a health dictatorship aiming at the imposition of liberticidal measures, hidden behind tempting promises of ensuring a universal income and canceling individual debt. The price of these concessions from the International Monetary Fund will be the renunciation of private property and adherence to a program of vaccination against Covid-19 and Covid-21 promoted by Bill Gates with the collaboration of the main pharmaceutical groups. Beyond the enormous economic interests that motivate the promoters of the Great Reset, the imposition of the vaccination will be accompanied by the requirement of a health passport and a digital ID, with the consequent contact tracing of the population of the entire world. Those who do not accept these measures will be confined in detention camps or placed under house arrest, and all their assets will be confiscated.”

Do we see anything in the Bible that points us to the gathering of a one-world religion, government, and economy one day?

11 Then I saw a second beast, coming out of the earth. It had two horns like a lamb, but it spoke like a dragon. 12 It exercised all the authority of the first beast on its behalf, and made the earth and its inhabitants worship the first beast, whose fatal wound had been healed. 13 And it performed great signs, even causing fire to come down from heaven to the earth in full view of the people. 14 Because of the signs, it was given power to perform on behalf of the first beast, it deceived the inhabitants of the earth. It ordered them to set up an image in honor of the beast who was wounded by the sword and yet lived. 15 The second beast was given power to give breath to the image of the first beast, so that the image could speak and cause all who refused to worship the image to be killed. 16 It also forced all people, great and small, rich and poor, free and slave, to receive a mark on their right hands or on their foreheads, 17 so that they could not buy or sell unless they had the mark, which is the name of the beast or the number of its name. 18 This calls for wisdom. Let the person who has insight calculate the number of the beast, for it is the number of a man.[a] That number is 666.

The Lord God is His name, and He knows everything, is everywhere and is all-powerful. None of this has escaped God’s sight. My hope is in the Lord no matter what happens the rest of this year. While 2020 has been an unprecedented year, the Lord has never moved or changed.

Do Not Be Shaken By What You See