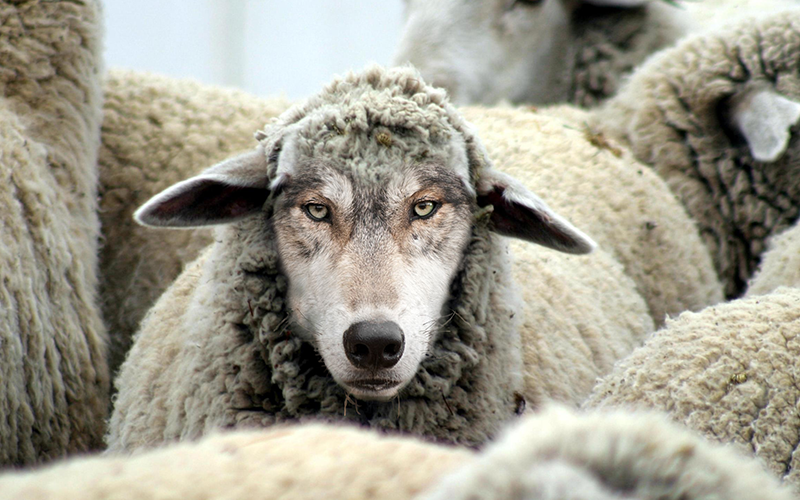 False Teachers also know as wolves in sheep’s clothing are the subject for today. Here lately, I have had a desire, slightly a nagging to look into the subject of false teachers.  We are supposed to look into it because we are told they have appeared and will appear again. To bury our heads in the sand would be a huge disservice to ourselves and those we care about and love.

What started me on this path?

Someone near me made a comment I couldn’t dismiss.

When something makes your ears perk up and listen, you know what’s being said needs to be investigated. Have you ever experienced that before? If you have, what did you do?

So began my journey into their claim.

My first stop – The Bible

Now some may say, “Hello, that was your first mistake! The Bible? Really? A bunch of fables and old fairy tales written by humans – you went there as your first authority?”

Yes, yes, I did, and it’s my goal each time. I believe the Bible to be the absolute truth and inspired word of God, so it’s my first go to when I have questions.

I searched the Bible and could not find this person’s claim in Scripture even though this person said it was biblical.

This now led me to search out the next avenue, and honestly, one could say if it’s not in the Bible, then case closed. I understand that, and I agree, but now my search was to know where they obtained this information. If it wasn’t from the Bible, then where did they hear it? Was it in church, in a magazine, or from a friend?

I started searching online, and my search led to watching YouTube videos. There’s a biblical confirmation if I’ve ever heard one, right? Not really, but hear me out for a moment.

I stumbled on a whole plethora of people who appear to be very godly, but some of their messages were making my ears tingle.

I found myself researching each of those teachers and going further down the path.

But the other thing I found were folks who disputed these teachers and were warning others about their teachings. In essence, they were calling them false teachers.

Where have I been

I watched as they shared examples to back up their arguments, and they were all very compelling, and the very things the Bible speaks about and says will happen.

Jesus says in Matthew 24:24, “For false Christs and false prophets will appear and perform great signs and miracles to deceive even the elect – if that were possible. See, I have told you ahead of time.”

The apostle Peter in 2 Peter 2:1 says, “But there were also false prophets among the people, just as there will be false teachers among you. They will secretly introduce destructive heresies, even denying the sovereign Lord who bought them – bringing swift destruction on themselves.”

Check out verse 3 of the same chapter, “In their greed, these teachers will exploit you with stories they have made up.”

Isn’t that fascinating and scary at the same time? Here we are warned this would be happening. They saw this taking place back then and cautioned against it occurring in the future.

We are to be diligent and alert.

Yesterday, I watched a video on YouTube of a pastor who was preaching on Genesis 2, specifically on the creation of man. He read the Bible passages aloud and then told everyone what the scripture passage meant. My jaw dropped as I listened to his explanation.

I opened my Bible and searched the scriptures to see if I could find his claim. I could not locate such an application.

This guy stood there and told a large congregation his interpretation of Genesis 1:26-27.

Before I tell you what he said, allow me to share with you what Genesis 1:26-27 says, “Then God said, “Let us make mankind in our image, in our likeness, so that they may rule over the fish in the sea and the birds in the sky, over the livestock and all the wild animals, over all the creatures that move along the ground. So God created mankind in his own image, in the image of God, he created them; male and female, he created them.”

The gentleman I am referring to, a pretty well-known evangelist on television, then went on to give his interpretation of the Scripture. He told his flock that since God made us in his image that “we are little gods. We’re made in his image, right? That’s what it says, so we must be little gods. A dog is a dog; a cat is a cat.”

Why do people make things to worship, participating in idolatry if we are all little gods? Why are we not higher than angels? Could this be false teaching?

There are lots of questions.

You see, when I heard that, my ears perked up, and I started searching for confirmation and clarification of his interpretation of the passage, and I haven’t found it yet. I have never heard that claim before, and surely if I am a little god, I want all the benefits. Wouldn’t you?

Folks, don’t allow a fancy three-piece suit in a large building to trick you into being apathetic. Search the scriptures for truth. Be on the lookout for false teaching.

The problem I see after watching all those videos is there are too many people out there claiming to be the end all be all on the Bible. There’s a lot of money floating around and ending up in some pretty deep pockets while the people sitting in the pews perish because they aren’t in the scriptures themselves and don’t know the truth.

Did anyone in the audience question his explanation?

We have a responsibility.

We have to search the scriptures ourselves, so we know whether or not what is being said is biblically correct. We need to read the Bible.

I cannot claim to know the Bible inside and out, but I make every effort to study the Scripture and find reputable commentaries to explain it to me if I don’t understand what I am reading.

As of right now, I have not run across anything that tells me I am God or even a little god.

I will end with this for now from Jesus, where he says in Matthew 7:15, “Watch out for false prophets. They come to you in sheep’s clothing, but inwardly, they are ferocious wolves.”

To date, I have not found the original claim that started my journey. Nor have I found the other claim. I will let you know if I ever see those in the Bible.

In the meantime, I am still investigating, and I will report back in with some more findings.

Even demons knew who Jesus was

Teachers Who Make a Difference – Part 5