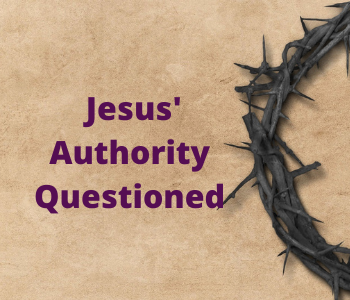 Today we continue on our trek through Holy Week according to the Bible narrative in the gospels of Matthew, Mark, Luke, and John. Each day I will pull from a different gospel account for that day’s events. Today we will look at the account of Jesus’ authority questioned.

“And they came again to Jerusalem. And as he was walking in the temple, the chief priests and scribes and the elders came to him, and they said to him, “By what authority are you doing these things, or who gave you authority to do them?”

Jesus said to them, “I will ask you one question; answer me, and I will tell you by what authority I do these things. Was the baptism of John from heaven or from man? Answer me.”

And they discussed it with one another, saying, “If we say, ‘From heaven,’ he will say, “Why then did you not believe him?” But shall we say, ‘From man’?” – they were afraid of the people, for they all held that John really was a prophet.

So they answered Jesus, “We do not know.” And Jesus said to them, “Neither will I tell you by what authority I do these things.”

Let’s break it down a bit.

Who are the “they” that arrive in Jerusalem? Jesus and his disciples.

When Jesus enters the temple, three small groups of people approach him – chief priests, scribes, and teachers of the law. Notice they want to know who gave him authority. Authority to do what? Perform miracles and teach, to name a few.

Rather than answer them, he presents his own question. I find their response somewhat hilarious because I picture these guys standing in a huddle-type circle discussing how they will respond. Instead of admitting in the slightest that God (they say heaven) gave Jesus the authority or man, they go with the typical child-like response – we don’t know.

Their response reminds me of what my daughter used to say when something broke, and she was the only one playing with it, “I don’t know.”

Jesus didn’t have to tell them anything. Christ justified himself in refusing to give them an answer to their demand, nor did they deserve to be told.

No man could do miracles unless God were with him.

Join me tomorrow as we look at the next day in Jerusalem during Passover week.

Verse Of The Day: Jesus Clears The Temple

What Does It Mean To Be Last?
Six Foot Ceiling: The Rooms Part 8