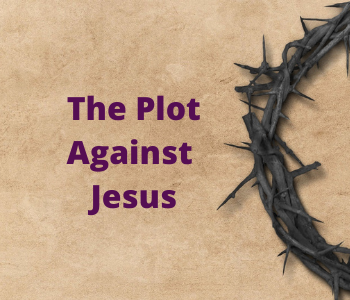 We are continuing on our journey through Holy Week or Passion Week as some call it. Each day this week, we are looking at Scripture that describes the days leading up to Resurrection Sunday. Today, we look at the plot against Jesus.

“And the chief priests and the scribes were seeking how to put him to death, for they feared the people.

Then Satan entered into Judas called Iscariot, who was of the number of the twelve. He went away and conferred with the chief priests and officers how he might betray him to them. And they were glad and agreed to give him money. So he consented and sought an opportunity to betray him to them in the absence of the crowd.”

Let’s break this down a bit.

The chief priests and the scribes were more afraid of the people than they were of God. So much so, they were looking for ways to get rid of this man named Jesus.

John 6:70, “Then Jesus replied, “Have I not chosen you, the Twelve? Yet one of you is a devil! He meant Judas, the son of Simon Iscariot, who, though one of the Twelve was later to betray him.”

Jesus knew Judas Iscariot would betray him and oppose him in the spirit of Satan.

Better than they hoped for.

It says the chief priests and the scribes were glad and willing to pay for his betrayal. Can you imagine how giddy they were with excitement when they realized that one of Jesus’ own was willing to betray him? It couldn’t get any better than that.

Let’s not forget who is also behind this? Satan.

Satan was there in the beginning, tempting Eve in the Garden of Eden. He tempted Jesus out in the desert, and now he is playing a part in the desires of the chief priests and scribes to have Jesus killed.

If we are not careful, we can fall prey to Satan’s schemes and be used to carry out his plans of attack on other believers. We see this happening in churches today and among well-meaning believers.

Satan is always plotting how he can ruin the lives of believers. Therefore as Ephesians 6:10 says, we are to put on the whole armor of God so that we can withstand the devil’s schemes.

Judas Iscariot didn’t realize where this plot was headed, but Jesus knew. This would not end well.

Join me again tomorrow as we look at the next day of events leading up to the crucifixion.

Satan Started At The Beginning