Verse Of The Day – Sheep And Goats 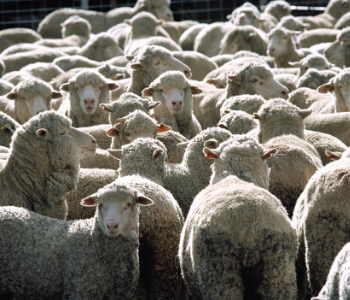 A sheep is making the rounds on social media these days. His name is Baarack. Perhaps you had seen the video of this gigantic sheep who had a significant amount of wool when he was found. The weight of his wool caused stress and physical harm. The video shows him getting a much-needed shave. Baarack has become an internet sensation.

“When the Son of Man comes in his glory, and all the angels with him, then he will sit on his glorious throne. Before him will be gathered all the nations, and he will separate people one from another as a shepherd separates the sheep from the goats. And he will place the sheep on his right, but the goats on his left. Then the King will say to those on his right, ‘Come, you who are blessed by my Father, inherit the kingdom prepared for you from the foundation of the world……”Then he will say to those on his left, ‘Depart from me, you cursed, into the eternal fire prepared for the devil and his angels.”

The kingdom of heaven was prepared for righteous people. Hell was prepared for the devil and his angels but now also serves as the doom of those guilty of the sins of omission of which Jesus was speaking. The “goats” refused to show compassion to King Messiah through helping the least of his brothers.

Jesus is interested in righteousness found in the whole person, from the heart. Moreover, true disciples of Jesus will love one another and serve one another with compassion. In doing so, they are serving Christ whether they realize it or not. Those who care very little for the gospel will do very little. They will exhibit very little compassion for others.

Lord, I pray that those who read those words from Jesus ask themselves whether they would be considered sheep or goats. I pray, Lord, that we would be more interested in righteousness pleasing and acceptable to you. Father, help us to become more like the disciples you want us to be. In Jesus’ name, I pray, amen.

Verse Of The Day: Can I Persuade You?

Verse Of The Day – The Cornerstone