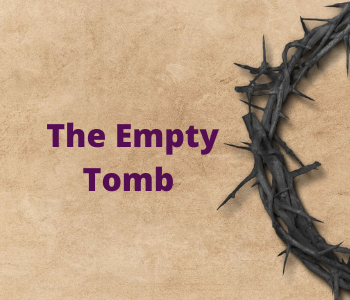 He has risen! The tomb is empty. It’s Resurrection Sunday! Today we celebrate Jesus’ resurrection from the dead. My heart is happy!

“Now, on the first day of the week, Mary Magdalene came to the tomb early, while it was still dark, and saw that the stone had been taken away from the tomb. So she ran and went to Simon Peter and the other disciple, the one whom Jesus loved, and said to them, “They have taken the Lord out of the tomb, and we do not know where they have laid him.”

So Peter went out with the other disciple, and they were going toward the tomb. Both of them were running together, but the other disciple outran Peter and reached the tomb first. And stooping to look in, he saw the linen cloths lying there, but he did not go in.

Then Simon Peter came, following him, and went into the tomb. He saw the linen cloths lying there and the face cloth, which had been on Jesus’ head, not lying with the linen cloths but folded up in a place by itself.

Then the other disciple, who had reached the tomb first, also went in, and he saw and believed; for as yet they did not understand the Scripture, that he must rise from the dead. Then the disciples went back to their homes.”

Mary Magdalene arrived at the tomb early. If you recall from earlier Scripture, Jesus healed her from seven demons, so I am not surprised she comes back to the tomb. She was there alongside Jesus’ mother as they and others watched Jesus die on the cross. She had gone from town to town with Jesus and the others as Jesus was doing his ministry. Her loyalty is obvious.

When she saw the tomb was empty, she ran and told the others. His resurrection was not her first thought as she ran to tell the others someone had taken him.

Two disciples respond, Peter and John. Together they go to the tomb with great speed to see for themselves what Mary reported.

John would only go as far as Mary did at first. He didn’t go in but instead bent down and looked in. It seems he didn’t have the courage to go in at first.

Knowing Peter, I am not surprised he went into the tomb. Despite his denials, he was still the leading figure among the disciples.

We are told they did not understand that Scripture says that Jesus must rise from the dead. They were at a loss and did not know what to do next, nor what to make of what they had seen.

First, they came to know of the resurrection through what they saw in the tomb; only later did they see it in Scripture.

The rock was rolled away.

The linen clothes lay there.

The dead body is gone.

The tomb is empty.

I read a few passages in Matthew 27 earlier that say the leaders recall that Jesus said He would rise again on the third day. They went to Pilate, and a guard was placed at the tomb. I wonder what the guards thought when the tomb they were protecting was found to be empty.

Sadly the leaders and teachers of the law chose to disregard who Jesus was, and they spread their false narrative. How many people believed them over what they saw and heard Jesus do?

Jesus rose from the grave. The tomb is empty. Our Savior has risen, and one day he is coming back.

The question is- are you ready?

Crucifixion: The Physical Trauma Of The Cross

Verse Of The Day: Jesus’ Crucifixion And Death