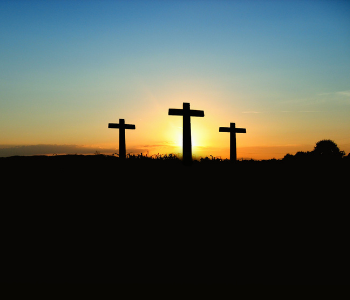 Today, we will look at the physical trauma of crucifixion on a cross. It’s Good Friday, the day Christians remember and recognize as the day Jesus Christ died on the cross some 2000 plus years ago.

Jesus was crucified on a cross under the hands of Romans soldiers.

The Jewish leaders looked for a way to kill him. Jesus was a threat to their standing with the people. He also claimed deity, which they considered blasphemous. With an insider, thirty pieces of silver, and some false witnesses, they got their wish.

Died for the world.

For years I discounted the severity of the cross regarding the physical aspect. I never let myself think past the normal recognition of Jesus’ sacrifice on the cross for me, and how thankful I was for that sacrifice.

But what did Jesus physically endure as he hung there for my sin? While I can’t answer that accurately because I wasn’t there, I decided to do some research to get some idea of what it must have been like. What does crucifixion do to the body physically?

I am sharing information from biblical scholars. Please note that what I am sharing is what I found in my research, keeping in mind, I didn’t spend hours upon hours looking under every rock. However, I feel that what I found is sufficient and gives me a better idea of what Jesus and others suffered under this form of punishment. Even without the information, I still believe Jesus died on the cross for my sin.

Luke 9:22, “The Son of Man must suffer many things and be rejected by the elders and chief priests and scribes, and be killed, and on the third day be raised.”

cross – a stake or post (as set upright); a pole or cross (as an instrument of capital punishment) exposure to death

crucifixion – means death on a cross; to impale on the cross; to extinguish; subdue; crucify

“Crucifixion was one of the cruelest and barbarous forms of death known to man. It was practiced, especially in times of war, by the Phoenicians, Carthaginians, Egyptians, and later by the Romans. So dreaded was it that even in the pre-Christan era, the cares and troubles of life were often compared to a cross.

The details of the crucifixion of Christ are passed over, the Evangelists content with the simple statement, “They crucified him.” (Matt 27:35; Mark 15:24). Following his trial before the Jewish and Roman authorities, Christ was led forth for crucifixion. Before the actual ordeal itself, he was scourged. The prisoner was bent over and tied to a post, while the Roman soldier applied blow after blow to his bared back with a lash intertwined with pieces of bone or steel. This in itself was frequently sufficient to cause death.

Several factors brought about the agony of the crucified victim. First, the painful but nonfatal character of the wounds inflicted.  Although there were two distinctive methods of affixing a living victim to a cross, tying or nailing, it is well established that Christ underwent the horror of the latter, or possibly both. ((Isaiah 53:5; John 20:25-29)

The third factor was the traumatic fever induced by hanging for such a long period of time.

Medical insight from the Bible Dictionary

What was the physical reason for the death of those on the cross? Recent medical studies have sought an answer to the question.

When a person is suspended by his two hands, the blood sinks rapidly into the body’s lower extremities. Within six to twelve minutes, the blood pressure has dropped to half, while the pulse rate has doubled. The heart is deprived of blood, and fainting follows. This leads to an orthostatic collapse through insufficient circulation.

Death during crucifixion is due to heart failure. Victims of crucifixion did not generally succumb for two to three days. Death was hastened by the “crucifragium” or the breaking of the legs.

“But when they came to Jesus and found that he was already dead, they did not break his legs” John 19:33.

Sometimes they built a fire beneath the cross that its fumes might suffocate the sufferer.

Among the Jews, a stupefying potion was prepared by Jerusalem’s merciful women, a drink that Christ refused. (Mark 15:23).

flogged – The Romans used a whip made of several strips of leather, which were embedded (near the ends) pieces of bone and lead. The Jews limited the number of stripes to a maximum of 40, but the Romans recognized no such limitation, and victims of the Roman floggings often did not survive.

Wine mixed with myrrh – The Talmud gives evidence that they mixed incense with wine to deaden the pain. Myrrh is a spice derived from plants native to the Arabian deserts and parts of Africa. (Mark 15:23)

crucified – A Roman means of execution in which the prisoner was nailed or tied to a stake or cross. In Jesus’ case, the soldiers drove heavy wrought-iron nails through the wrists and the heel bones. If the victims lingered too long, death was hastened by breaking their legs. Archaeologists have discovered the bones of a crucified man near Jerusalem, dating between AD 7 and 66, which shed light on a person’s position nailed to a cross.

Only slaves, the basest of criminals, and offenders who were not Roman citizens were executed in this manner. First-century authors vividly describe the agony and disgrace of being crucified. (Phil 2:8).

charge against him – It was customary to write the charge on a wooden board that was carried before the victim as he walked to the place of execution, and then they affixed the board to the cross above his head. (Mark 15:26)

wine vinegar – A sour wine, the drink of laborers and common soldiers. Jesus refused a sedative drink but later was given the vinegar drink when he cried out in thirst. (Luke 23:36)

“The physical suffering that Jesus willingly endured was beyond horrific. As horrible as His physical suffering was, we must understand that it paled in comparison to the suffering He endured in His heart, as He took upon Himself the sins of the world.”

The suffering was for all.

Jesus’ death on the cross was for the world.

John 3:16-18 says, “For God so loved the world, that he gave his only Son, that whoever believes in him should not perish but have eternal life. For God did not send His Son into the world to condemn the world, but in order that the world might be saved through him. Whoever believes in him is not condemned, but whoever does not believe is condemned already, because he has not believed in the name of the only Son of God.”

Understanding more about our Savior’s suffering on the cross makes me appreciate even more what he did for me. His suffering was beyond anything I deserve as a sinner, but I am so thankful.

This weekend is a time for me to remember that death has been defeated. Jesus didn’t stay on the cross, and the Jewish and Roman leaders failed. I know that my redeemer lives, and one day he will come back, and the whole world will see the King of kings and Lord of lords.