Verse Of The Day – What’s Wrong with Miracles? 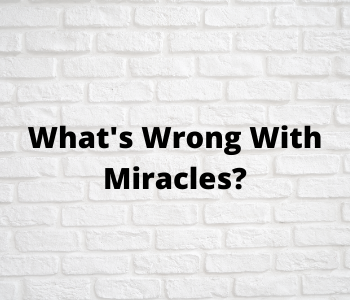 Do you believe in miracles? Have you seen miracles happen? Have you been on the receiving end of a miracle?

Let’s look at a few passages in Scripture of some folks who did witness miracles.

In that hour he healed many people of diseases and plagues and evil spirits, and on many who were blind he bestowed sight. And he answered them, “Go and tell John what you have seen and heard: the blind receive their sight, the lame walk, lepers are cleansed, and the deaf hear, the dead are raised up, the poor have good news preached to them. And blessed is the one who is not offended by me.”

Let’s break it down a bit.

Who is John? John the Baptist.

Where was John the Baptist when this occurred? He was in prison and had been there a few months. Upon hearing the report of all that was happening, he decided to send a couple of his disciples to Jesus to ask a very important question – are you the one we have been waiting for?

John the Baptist needed a little reassurance. After all, he had been proclaiming the coming of the Messiah. Jesus, the Messiah, wasn’t exactly doing the things people thought the Messiah would do when he came.

What was the evidence?

Notice that Jesus lays out his works in the order of importance. He starts with physical ailments and ends with the good news. John should recognize that this is why the Messiah came.

Jesus did not want John to be discouraged. These were all things the Messiah was prophesied to do in Isaiah 61:6. It was predicted in the Scriptures.

Is there something wrong with this man Jesus who performed miracles and proclaimed the good news?

No. He is the promised Messiah spoken about many times throughout the Old Testament Scriptures.

Jesus wasn’t what others thought he should be, and he gives a warning of sorts in verse 23 when he says blessed is the one who doesn’t get offended. In other words, don’t let where he came from, family background, or childhood education distract you from the truth.

Be careful you don’t discount Jesus just because he isn’t who you think he should be.

Verse Of The Day: No One Can Hide

Verse Of The Day – Fear – A Tool Of The Enemy

Verse Of The Day – Lifestyle Choices