We Are A Divided Nation – Now What? 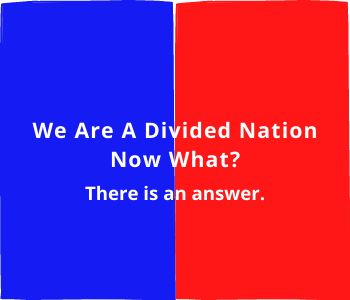 Congratulations America! November 3, 2020, has proven without a shadow of a doubt what most of us thought already – we are a divided nation. Now, what do we do?

As I sat down to write this, I remembered a catchy tune from my childhood years. Perhaps you remember it too.

“This land is your land, and this land is my land,
From California to the New York Island
From the Redwood Forest to the Gulf stream water
This land was made for you and me.” by Woody Guthrie.

I don’t see any division in those words, do you?

In my Bible study time on the word “division,” I found several verses on division. In most of the references I found, the divisions seemed to be caused by a disagreement between two sides who could not agree on certain matters. Even among their own people, they disagreed.

John 10:19 is one example, “At these words the Jews were again divided. Many of them said, “He is demon-possessed and raving mad. Why listen to him?” But others said, “These are not the sayings of a man possessed by a demon. Can a demon open the eyes of the blind?”

Even amongst themselves, they disagreed. Each side had their own ideas about who Jesus was. Despite Jesus performing many other miracles in front of them, many still denied he was the promised Messiah, hence his ultimate crucifixion on the cross.

Here’s another example from Jesus himself to the people gathered around him.

Red and blue have their ideas on fixing this country, but clearly, like the Jews in Jesus’ day, we disagree. That was proven on November 3, 2020, and as we await confirmation, the division continues.

Let’s face it; this nation is in unchartered territory as a whole. 2020 has been unprecedented and has rocked our foundation. If you haven’t noticed, you must be hiding under a rock, although some days that’s tempting. Countries around the world know we’re divided.

What does one do? How do you get through each day without getting overwhelmed with the anxiety and stress of our nation’s current state?

I can only control myself. I can only manage my household.

It’s bad enough, our country is divided, but worse, in my opinion, is if a household is divided because how the household functions affects everyone living in it and ultimately affects their future.

As Jesus says in the passage above, a house divided against itself will not stand. How can it stand if everyone in the house cannot come together?

I know families that are divided and haven’t spoken to each other in years over the 2016 election. All the years of loving each other and doing life together have been wiped away over election choices. It’s a painful situation for all involved. The division is evident.

Where do we start?

I believe it starts at home.

Joshua 24:14-15, “Now fear the Lord and serve him with all faithfulness. Throw away the gods your forefathers worshipped beyond the River and in Egypt, and serve the Lord. But if serving the Lord seems undesirable to you, then choose for yourselves this day whom you will serve, whether the gods of the Amorites, in whose land you are living. But as for me and my household, we will serve the Lord.”

I will continue to live for the Lord because I believe God is ultimately the one in control. For me to try and wrestle the control away from him would be foolish. Who am I?

The Lord is well aware of this nation’s current state in more ways than we know, and I trust the Lord with whatever decision he makes. Come January 20, 2021, the Lord will have whomever he chooses as the next president. God is still King and sits on the throne, even if some have removed him from the public square.

Time to get our house in order and get ready for the Lord’s return.

You Reap What You Sow

We Are A Divided Nation – Now What? Part 2