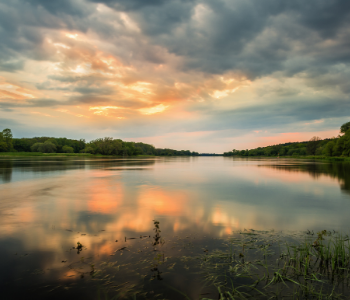 Yesterday I left off with complete chaos inside our little river cruiser. Now it was time for action, much bigger action than we had taken in the last 15 minutes. It was time to abandon ship! I was still of the mindset, though, the river is brown, you won’t be found.

So, we all agreed except the panicked broad, of course, to paddle ourselves as close to shore as we could. Then one by one, we would attempt a leap to dry land. The problem was many of the areas were much higher than the river, so finding a low-lying area remotely suitable was a challenge, especially given our solo cups’ current conditions. After all, solo cups are not made for bailing out a bunch of water. Hold a great cup of lemonade on a hot day, yes, but used for bailing river water, no.

We finally managed to get close enough, and my friend leaped out first, successfully, I might add, grabbed hold of the boat and pulled us closer. I decided I wasn’t waiting on a panicked girl to jump, so I exited next.

Would you believe that the force of the water entering the boat slowed way down when I got out? I know what you’re thinking; they all thought that too. It was as if the weight shifting shifted the boards ever so slightly. I didn’t think I weighed enough to make a difference, but I guess I did. Good thing, too, because the panicked girl was getting ready to jump next.

My friend and I convinced the other two to row the boat back to the campsite. They could handle it now that the water had subsided.  The panicked girl could use both cups to bail the little water coming in. They agreed, and off they went.

My friend and I were a pretty good distance from our campsite ON THE OTHER SIDE OF THE RIVER! Let me add detail here about the river. It is very deep and at least 30 to 40 feet wide – and brown.

Did I mention it was brown?

We had not thought this through when we got off the boat! And now, our friends in the boat were on down the river out of sight.

People – this is back when there were no CELL PHONES! HELP!

Houston, we have a problem.

How were we going to get to the other side of the river and back to camp? There were no bridges, no signs, no trails, no fallen trees. Wooded areas surrounded us.

If we jumped in the river, the current would take us further down. Maybe we could swim to the other side eventually, but after all the bailing we had done for the last 10 to 15 minutes and putting up with the panicked girl, we were already tired. And don’t forget, add a seven-hour drive in there as well.

A good friend of mine always says, “When you don’t know what to do, do nothing.” And so, for the next few minutes, we did nothing but think about our next move.

Often we get ourselves into situations because we’re in a hurry to make something happen. We don’t take the time to think; clearly, we’re not really planning carefully.  I keep coming back to a verse in the Bible that says this, “Be still before the Lord and wait patiently for Him.” Psalm 37:7.

Just like the disciples in the boat panicking over the winds and waves in Mark, Chapter 4 yesterday, we panicked, got in a hurry, and made a dumb decision. I want to say it was all panic girl’s fault for the decision we made to abandon ship, but at the end of the day, if we had just stayed calm, we would have surmised getting out on that side of the river wasn’t a good idea.

How often do you make rash decisions in your life and wish you could go back and undo them?

How many times have you been angry or frustrated with yourself for being in a hurry, only to find out you made the wrong choice?

It’s very easy to do, and this was one of those times for me. Not only did I get out on the wrong side of the river, but now I was mad at myself for making a dumb decision, and I had to figure out how to fix it. Add insult to injury, and our other friends would be wondering where we were.

Stay tuned tomorrow when I tell you what our resolution was. You’ll never believe this one in a million years!

Lord, we get in a hurry so often, and we end up making decisions that aren’t very wise. Please help us, Father, to slow down, think about the choices we are making, and determine that following your pattern of doing things really is better for us. Please give us the wisdom to make the right decisions. Please give us the wisdom to know the difference. Thanks, Lord. In your Son’s name, I pray, Amen.

God Can Change You If You Let Him

The Camping Escapades 2 – The Boat