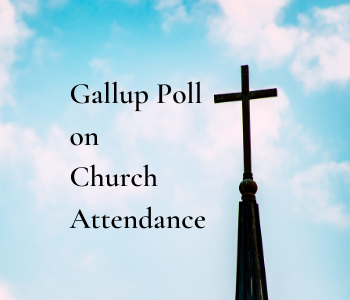 I’ve been attending church most of my life, except for the years I lived for myself and not the Lord. I was on staff at a church for many years and saw a decrease in attendance, but some years ago now.

So I searched the internet and found an article dated March 29, 2021. Those of you who attend church regularly or used to before the virus will be familiar with the verbiage in the article.

The following information is not my own. I am sharing the information from the article with you.

Americans’ membership in houses of worship continued to decline last year, dropping below 50% for the first time in Gallup’s eight-decade trend. In 2020, 47% of Americans said they belonged to a church, synagogue, or mosque, down from 50% in 2018 and 70% in 1999.

U.S. church membership was 73% when Gallup first measured it in 1937 and remained near 70% for the next six decades before beginning a steady decline around the turn of the 21st century.

The decline in church membership is primarily a function of the increasing number of Americans who express no religious preference. Over the past two decades, the percentage of Americans who do not identify with any religion has grown from 8% in 1998-2000 to 13% in 2008-2010 and 21% over the past three years.

Given the nearly perfect alignment between not having a religious preference and not belonging to a church, the 13-percentage-point increase in no religious affiliation since 1998-2000 appears to account for more than half of the 20-point decline in church membership over the same time.

Most of the rest of the drop can be attributed to a decline in formal church membership among Americans who do have a religious preference. Between 1998 and 2000, an average of 73% of religious Americans belonged to a church, synagogue, or mosque. Over the past three years, the average has fallen to 60%.

The decline in church membership, then, appears largely tied to population change, with those in older generations who were likely to be church members being replaced in the U.S. adult population with people in younger generations who are less likely to belong. The change has become increasingly apparent in recent decades because millennials and Gen Z are further apart from traditionalists in their church membership rates (about 30 points lower) than baby boomers and Generation X are (eight and 16 points, respectively). Also, each year the younger generations are making up an increasingly larger part of the entire U.S. adult population.

Still, population replacement doesn’t fully explain the decline in church membership, as adults in the older generations have shown roughly double-digit decreases from two decades ago. Church membership is down, even more, 15 points, in the past decade among millennials.

The two major trends driving the drop in church membership — more adults with no religious preference and falling rates of church membership among people who do have a religion — are apparent in each of the generations over time.

Also, each generation has seen a decline in church membership among those who do affiliate with a specific religion. These declines have ranged between six and eight points over the past two decades for traditionalists, baby boomers, and Generation X who identify with a religious faith. In just the past 10 years, the share of religious millennials who are church members has declined from 63% to 50%.

As would be expected given the 20-point decline in church membership overall, the Gallup data show declines among all major subgroups of the U.S. population beyond age, with some differences in the size of that decline.

In addition to Protestants, declines in church membership are proportionately smaller among political conservatives, Republicans, married adults, and college graduates. These groups tend to have among the highest rates of church membership, along with Southern residents and non-Hispanic Black adults.

The U.S. remains a religious nation, with more than seven in 10 affiliating with some type of organized religion. However, far fewer, now less than half, have a formal membership with a specific house of worship. While it is possible that part of the decline seen in 2020 was temporary and related to the coronavirus pandemic, continued decline in future decades seems inevitable, given the much lower levels of religiosity and church membership among younger versus older generations of adults.

Churches are only as strong as their membership and are dependent on their members for financial support and service to keep operating. Because it is unlikely that people who do not have a religious preference will become church members, the challenge for church leaders is to encourage those who do affiliate with a specific faith to become formal and active church members.

While precise numbers of church closures are elusive, a conservative estimate is that thousands of U.S. churches are closing each year.

A 2017 Gallup study found churchgoers citing sermons as the primary reason they attended church. Majorities also said spiritual programs geared toward children and teenagers, community outreach and volunteer opportunities, and dynamic leaders were also factors in their attendance. A focus on some of these factors may also help local church leaders encourage people who share their faith to join their church.

Results for this Gallup poll are based on telephone interviews conducted 2018-2020, with a random sample of 6,117 adults, aged 18 and older, living in all 50 U.S. states and the District of Columbia. For results based on the total sample of national adults, the margin of sampling error is ±2 percentage points at the 95% confidence level. All reported margins of sampling error include computed design effects for weighting.

Each sample of national adults includes a minimum quota of 70% cellphone respondents and 30% landline respondents, with additional minimum quotas by time zone within the region. Landline and cellular telephone numbers are selected using random-digit-dial methods.

The first thing I thought of when I read the research on church attendance was future generations. I have heard it said we are one generation away from being godless. If, as a nation, we continue to decline spiritually, there’s an excellent chance we could see our young people raise children who don’t know the Lord.

I have always valued the wisdom and faith of the older generation. Collectively they have an enormous amount of faith and wisdom that is disappearing more each year.

Is it a requirement to attend church and be a member? Most would say no. In fact, some would say they get their church outdoors just them and God.

Are there benefits from attending church and being a member? Yes, but not the kind one might think. Membership is free. Fellowship is great, and the Word of God is preached. Longlasting friendships are made, and lives are changed.

I realize the virus has played a part in some falling away from the church and their faith, but this research considers a lot more than those affected by the virus.

What’s the answer? I don’t know.

What can we do? Pray.

One thing I believe with my whole heart – nothing escapes the Lord’s sight. He knows what is happening, and he has known.

If you have children, teach them about the Lord. Read your Bible and live out your faith in front of them. If you don’t, who will?

Read your Bible daily and stay in constant communication with the Lord.

I don’t know what the future holds, but I know who holds the future.

My hope is in the Lord. Lamentations 3:24, “The Lord is my portion,” says my soul, “therefore I will hope in him.”

No matter how bad the numbers get, remember the Lord is in control and still sits on the throne.

30 Days to Understanding the Bible – The Church

Verse Of the Day – Marital Faithfulness

Verse Of The Day – Expressions of Love