Rejected By His Own People 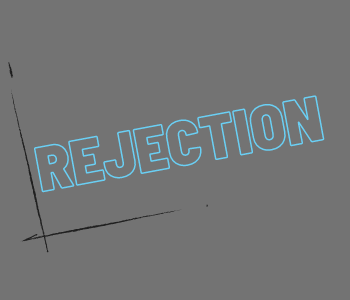 Welcome to another edition of The Teaching Lady. I am so thankful you stopped by. Today, we look at rejection.

Being rejected is never fun. Just last week, I ran an ad on Facebook advertising this blog, and wow, did I get rejected by many, men mainly. Some were very cruel and downright scary. Similarly, some were insulting and left disturbing memes, but some were supportive and appreciative of this blog. I am grateful for their support.

At the end of the day, as I lay my head down on my pillow at night, I remember what the Lord told Samuel when the people were shouting for a king. They didn’t want Samuel to lead them, and Samuel felt rejected, from what I can tell. But the Lord spoke to Samuel and reminded him the people were rejecting God Almighty, not Samuel.

I like to share God’s word, and yes, there will be many who reject it. However, it isn’t me they are rejecting; it is God Almighty. I am simply an instrument being used to share his truths the best way I know. I am not looking to replace pastors or preachers. I am not looking to usurp their authority.

Let’s dive into today’s prophecy about the rejection of the Messiah.

Isaiah 53:3, “He was despised and rejected by men, a man of sorrows and acquainted with grief; and as one from whom men hide their faces  he was despised, and we esteemed him not.”

Luke 23:18, “ But they all cried out together, “Away with this man, and release to us Barabbas”

Isaiah, the prophet, said the Messiah would be rejected and despised. Men would look at him and turn their faces. The long-awaited Messiah would be unrecognizable because he didn’t look or act the part.

In John, we read he went to his own people first, the Jews, and experienced rejection.

Coming out of the silent era, the 400 years between the Old Testament and the New Testament, the Pharisees, the ruling body at that time, were large and in charge. The Messiah would pose a threat to them.

Jesus wasn’t a traveling vagabond from another city.  However, when Jesus started his ministry of teaching and healing, the threat became real.

He was the Messiah prophesied in the Old Testament books they so strongly held onto.

In the book of Luke, we read about the purposeful push to have Jesus killed. The rejection from the Jewish people led him to the cross.

To them, he was preaching blasphemy against God. Many saw him as a magician or some kind of deceitful healer who quoted Scripture. Therefore, the guy from Nazareth couldn’t possibly be the Messiah. Where was his power? Why hadn’t he overthrown Rome? Obviously, He couldn’t be the Messiah they had been waiting for.

Many times, Jesus called them out on their hypocrisy. But, in fact, His teachings touched tender areas of their lives and made them uncomfortable; hence, many rejected them.

What will you do with the Messiah? Will you embrace him and what the Bible says about him? Or will you reject him too? Unfortunately, based on some of the responses to my ad, many have already rejected Jesus.

My prayer is you know the Messiah, Jesus Christ, as your Lord and Savior. He loved us so much he gave his life for us on the cross. Jesus suffered, died, and was buried. On the third day, he rose from the grave. The Messiah ascended into heaven, and one day he is coming for his bride, the church.

Meanwhile, let’s do everything we can to run the race the Lord has set out before us. God is faithful, and we need not worry about being rejected. He loves us with everlasting love.

Why Did He Come? The Good News